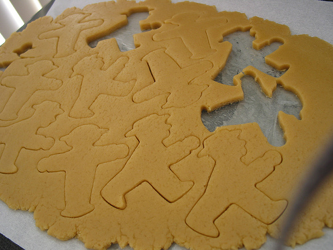 In the wake of Apple’s sudden decision to remove nearly all “sexy” applications from the App Store, we’ve been hearing that the company is also clamping down on so-called “cookie-cutter” applications — iPhone apps that are built from templates using one of the many app-building services available. This would be yet another major change for the App Store, as it already features thousands of such applications. And, perhaps more important, quite a few companies have sprung up to facilitate building iPhone applications. I’ve reached out to Apple to ask if they’d like to clarify their stance, but given their lack of transparency in the past, I’m not betting on getting anything definitive. To try to get to the bottom of the current situation, I spoke with multiple developers (some of whom wished to remain anonymous) to find out what Apple was telling them.

Between the developers I spoke to, the consensus was this: Apple doesn’t appear to be opposed to ‘app generators’ and templates per se, but in the last month or so it has started cracking down on basic applications that are little more than RSS feeds or glorified business cards. In short, Apple doesn’t want people using native applications for things that a basic web app could accomplish. For some of these services that’s bad news, because that’s exactly the sort of application they produce; any new applications they submit are going to get rejected. But all hope isn’t lost for them, provided they can make their apps more useful.

Unlike the ‘sexy’ app ban that took place a few weeks ago, when Apple gave developers no options to keep their apps on the store, over the last month the company has been reaching out to at least a few app building services to suggest what they should be doing.

The founders of Appmakr, which has been used by publications like The Atlantic to build iPhone applications, say that the process has been quite positive (though they are quick to clarify that applications built with their tools are more full-featured than the basic RSS apps described above). After some suggestions from Apple, the service is integrating new features like in-app purchases, instant notifications, offline access, and landscape viewing modes to their app templates. Another developer mentioned that they might include a tip calculator for restaurant apps. Appmakr’s hope (and one that I’m sure is shared by other developers) is that applications generated using their tools will eventually be given an accelerated path through the App Store’s approval process, because Apple is familiar and happy with the kind of apps they produce.

However, from what I’ve gathered not everyone is having as much luck as the Appmakr team. Multiple developers mentioned that they’d heard of some app vendors that Apple wasn’t being nearly as accommodating towards — I suspect services offering the most basic templates are getting hit hardest. That said, the developers I spoke to said that they’d only heard about Apple blocking newly submitted applications, and that there wasn’t an indication that Apple is going back and removing all of the overly-basic apps they can find.

So why is Apple doing this? Here’s what Medialets CEO Eric Litman had to say, which I think perfectly summarizes the situation.

This is the ongoing balance point between encouraging innovation and growth on one side and wanting to tightly control user experience on the other. Apple wants iPhone apps to be superior to Web experiences because they are extremely sticky and drive people specifically to buy the iPhone over competing smartphone platforms. Apps that are too simple or largely indistinguishable from the Web, other apps or particularly other apps on other platforms send the message to end users that the iPhone app ecosystem might not be particularly special.

Now the challenge for Apple is that the app building platforms are extremely attractive to a wide swath of the market that would otherwise be reluctant to bear the cost and complexity of developing an app from scratch. We have already seen apps from personal bloggers up to major media brands using some of these platforms, and many of the folks in that spectrum have content Apple would certainly want in the App Store. Interestingly, some of those same developers also have fully custom-built apps in the App Store, too.

So what are the platforms to do about the recent crackdown from Apple? There’s really only one choice if they want to continue to exist on the iPhone: invest in building out considerably more flexibility into their platforms to allow each app to differ from the others they build. Integrate more features and take the time to nail the design and UI elements to be representative of what Apple wants to see in every app.

For better or worse, Apple will be looking more closely at apps from the platforms than from individual developers. AppLoop, the first startup to announce and iPhone-specific app builder, is already gone. Others will almost certainly follow.

Overall, this will almost certainly result in a better experience for users as they have to deal with fewer spammy apps. But, as I wrote when Apple launched its war on sex apps last month, the policy change may also scare developers. After effectively sending a message to developers that basic applications were okay, Apple is again changing its mind.  Some developers may be hesitant to build their businesses around the iPhone, knowing that at any moment Apple could have a change of heart and cut off their only mode of distribution.

Thanks to Robert Strojan for the tip
Photo by Goosmurf