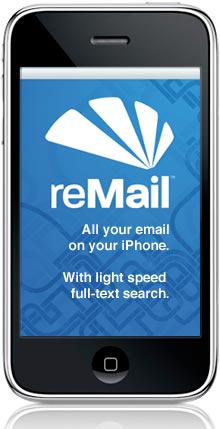 Last month, Google acquired reMail, the startup behind a very powerful application that brought full-text search to the iPhone. That’s great news for the reMail team, but it had a major downside: Google was effectively killing off the product by removing it from the App Store (though it would continue to function for users that had already downloaded the app). Fortunately, today comes news that reMail will continue to live on in some form: the company has just announced that it’s open sourcing the product. You can find the Google Code site for the project here.

Founder Gabor Cselle outlines what the product’s code can be helpful for:

As someone who is passionate about mobile email, my hope is that developers interested in making email-related apps can use reMail code as a starting point. Part of the reason email apps are hard is because you have to pay the tax of figuring out how to download email via IMAP, parse MIME messages, handle attachments, and store data. reMail has already solved these problems. If you have a great mobile email idea, I hope you will find reMail’s source code helpful in your quest.

There’s a good chance that we’ll soon see reworkings of the app for the iPhone: the project’s documentation specifically details how to get it up and running on the popular platform. The Google Code site also includes some ideas on how to improve the application, based on some of reMail’s most common feature requests (suggestions include implementation of a landscape mode, more compatible email account types, and improved autocomplete).

Google did something similar to EtherPad late last year, after it acquired the application’s developer AppJet. At first, EtherPad was simply going to shut down as the team moved to Australia to work on Google Wave. But after significant backlash, Google and AppJet quickly made moves to open source the project.