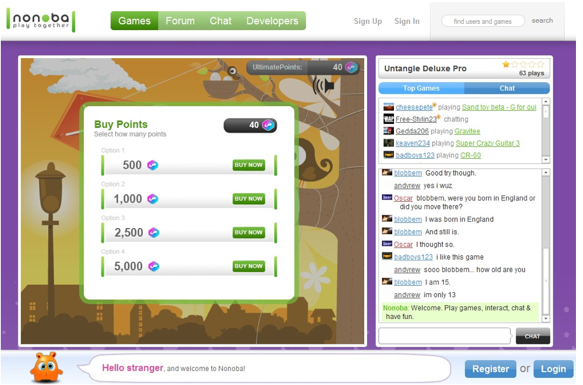 Micropayments startup PlaySpan has another partnership to add to the list. The startup has signed deals with hi5, THQ and Nickelodeon, and most recently Adobe. Today, PlaySpan is partnering with Nonoba, which offers a Ning-like platform for game development.

Nonoba’s GameRise allows anyone to develop and manage customized gaming sites within a community. PlaySpan powers micro-payments across over 1,000 video games and virtual worlds and has virtual goods storefronts on Facebook, MySpace, within games and on its standalone site. With the new partnership, PlaySpan will offer Nonoba’s 4,000 Flash games to marketplace customers. PlaySpan’s microtransactions will also be offered to Nonoba’s developers to allow Flash game developers to monetize their games.

With all of the partnerships PlaySpan is racking up, the startup is fast securing its place as a player in the micrpayments space. In December, PlaySpan revealed some telling numbers about the strength of the virtual goods space, reporting that over $30 million was spent on virtual gifts over the holiday season. Last year, PlaySpan acquired micro-transaction app developer Spare Change, which powered micropayments across 700 social networking apps on Facebook, MySpace, and Bebo.