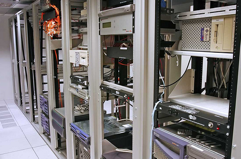 Google’s secret sauce is live and synchronous replication. So every action you take in Gmail is immediately replicated in two data centers at once, so that if one data center fails, Google will transfer data over to the other one. Traditionally, Google says, synchronous replication can be very expensive for companies. For example, the cost to back up 25GB of data with synchronous replication can range from $150 to $500+ in storage and maintenance costs per employee. Google says that exact price depends on a number of factors such as the number of times the data is replicated and the choice of service provider. Of course, Google replicates all the data multiple times, and the 25GB per employee for Gmail is backed up for free. And data from Google Docs, Google Sites, Google Docs, Google Calendar, Google Talk and Google Video, which encompass most of the applications in Google Apps, is also synchronously replicated for free.

The reason that Google can offer these services for free is because the tech giant already operates large data centers simultaneously for millions of users and also balances loads between data centers as needed. Google also claims that its high speed connections between data centers allows the company to replicate and transfer large amounts of data quickly from one server to another.

Google says synchronous replication is a more attractive option than the common practice that many small businesses take by backing up email by copying the data to a tape on a weekly or daily basis, which seems to be an arduous task. Larger companies opt for a storage area network (SAN) to back up data, which Google says is an expensive process.

Sheth declined to identify the timeline of when each app began to use the backup solution. Sheth did say that bringing all the apps together into replication was a complex process. Google Apps is currently being used by 2 million businesses with 20 million active users.