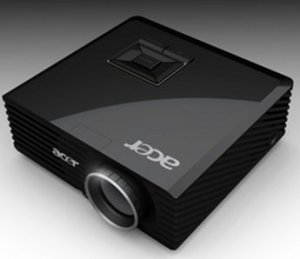 Lots of news coming out of CeBIT this year, including the latest projector from Acer, the K11. The K11 is a pico projector, so it’s the latest in the current crop of smaller display options. Measuring a mere 122 x 116mm, it’s ideal to stuff in your laptop case to take to that next meeting.

The K11 is a little different then some of the other projectors coming out though, in that it uses DLP with LEDs as well as the standard lamp configuration. Acer has said that this will give the K11 a display life of 20,000 hours before failure, which is quite reasonable. The K11 also has a built in USB port, and an SD card reader. The 2000:1 ratio will allow you to project widescreen as well as the standard 4:3 format, with a 200 lumen brightness ratio. We’re working on getting one of these to review, and we will be comparing it to a couple of other projectors in this market segment, the 3M and the Optoma.