Kampyle , maker of a user feedback analytics platform, is finally confirming a round of financing it closed in 2009. I had a chance to sit down with Kampyle CEO Ariel Finkelstein who officially confirmed that Carmel Ventures led the company’s $1M Series A round, closed back in January 2009. He also shared with me that the company has begun beta testing a new feedback product for downloadable applications.

Last year was a pivotal one in the life of Kampyle, which complemented its round of financing with a blow-out year across all KPI’s. Customer growth rate surged 600%, up 25,000 for a total of 35,000 (although Finkelstein did not share how many of these are paying customers).

On average, 19 users saw a Kampyle feedback button every second, ultimately converting to a total of 8M feedbacks processed. Interestingly, 57% of users who provided feedback included their real email address, thereby expressing their desire for a follow-up by the website owners or software providers that implemented the feedback form.

Kampyle is enhancing its current feedback products, one for websites, the other for software install/uninstall, with ‘Kampyle for Applications’. Currently being beta-tested, the new product is designed to solicit user feedback regarding people’s actual usage of the applications.

With this third product, and integrations with SalesForce, Omniture, NedStat and Google Analytics, Kampyle believes it’s able to provide the holistic, end-to-end view software developers require to effectively understand their user flow—from the initial user visit to their website, through the installation phase, to the user’s actual usage and possible uninstall.

Kamyple is extending a special 20% discount on all its premium packages to the first 50 TechCrunch readers that use the following coupon code: ‘techcrunch’. 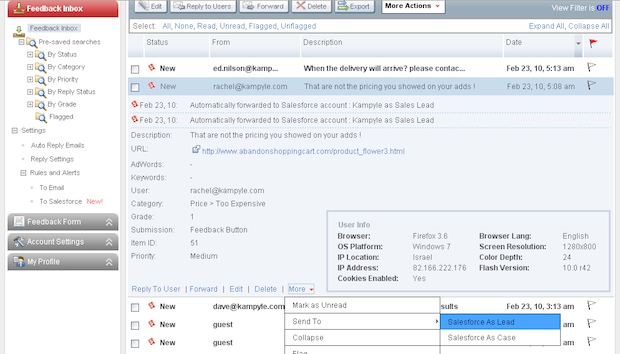