Late last month, Apple made the abrupt decision to remove any applications it deemed to be ‘sexy’ from the App Store, citing complaints from parents. But the process of removing applications was clearly imperfect, as Apple pulled down some applications only to restore them a few days later. And apparently they missed a few: we’ve gotten word from one app publisher that had a ‘boob’ application called Tubes! earn nearly $10,000 in the week following Apple’s sex ban. Not because it was an especially good application, but because it was one of the few left.

Before Monday, February 15, when the Apple sex ban started going into effect, Tubes was only pulling in around $30 a day. A day later, that number had more than doubled. As the days passed (and more sexy apps were removed), the application climbed up to a peak of nearly $1,600 a day. And then at 5:30 PM yesterday, Tubes! had its rise to glory cut short. 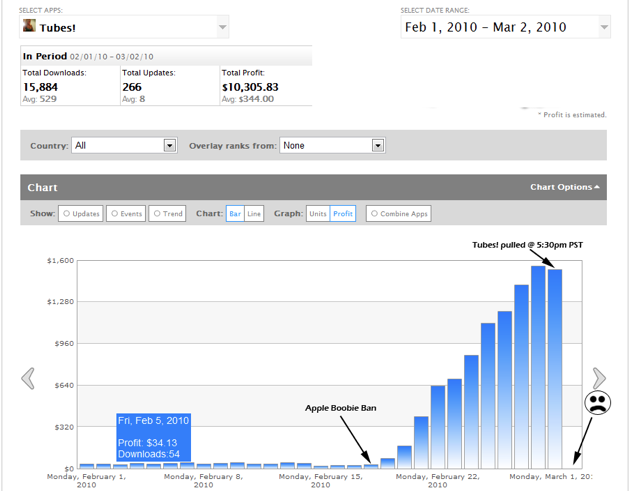 So how exactly did Tubes! slip through the cracks? The answer is pretty simple: it wasn’t available in the United States. The application was published by iPhone development house Mobile Simplicity, which generally builds more useful apps like CraigsMobileList (a mobile client for the popular classifieds site) and What’s Fresh (which tells you which fruits are in season). Mobile Simplicity built the Tubes! application at the request of a client, but under the condition that the application would not be sold in the United States, because the firm didn’t want the application to be listed alongside its more  respectable (ahem) apps.

Mobile Simplicity CEO Tony Lombardo says that application finally caught Apple’s attention when it started climbing up the top app charts (he thinks it got as high as #4 overall in Germany). Lombardo actually says he’s okay with the ban, but he does wish there was a way for Apple to allow these apps on the App Store under their own category rather than banning them outright.

It’s worth pointing out that in an entirely hypocritical move, Apple has allowed some larger companies like Sports Illustrated and Playboy to keep their sexy apps, which gives them a monopoly on bikinis and cleavage on the App Store. And, as we can see from the chart above, that can translate to quite a bit of money.