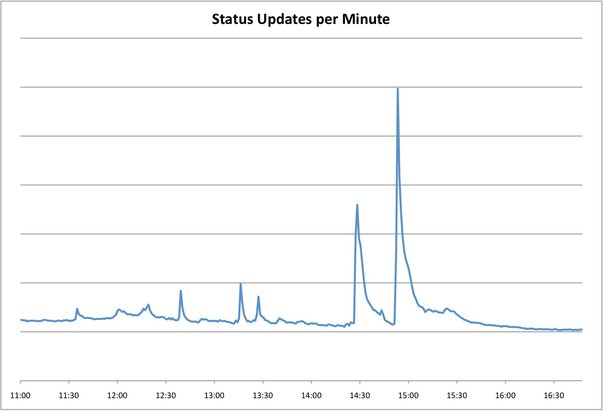 If you’re either American or Canadian (or just a hockey lover), chances are you were watching the gold medal hockey game yesterday. And with over 400 million users, there’s also a good chance you have a Facebook account. So what does it look like when those two worlds collide? Like the picture above.

As you can see, Facebook status updates per minute exploded at two times yesterday. The first peak, at 2:29 PM PST, is when Zack Parise of the U.S. tied the game with a goal in the third period. The second, much larger peak took place at 2:54 PM PST, when Sidney Crosby scored the game-winning goal for Canada in sudden-death overtime. All told, more than 3.5 million status updates were sent during those two times, according to Facebook. Perhaps even more remarkably, that was twice the pace of updates for the rest of the day.

While Twitter has yet to release similar stats, the service also undoubtedly saw an explosion of tweets during those two times. At one point after the U.S. scored, my entire tweet stream except for two tweets was some variation of “USA USA,” “OMFG!! USA,” “GOAL HOLY JESUS USA !!!1!!!,” or the like.

Data released a week or so ago had Twitter seeing 50 million tweets per day now. Meanwhile, recent Facebook data says that the networks sees over 60 million status updates posted each day (from 35 million active status updaters).