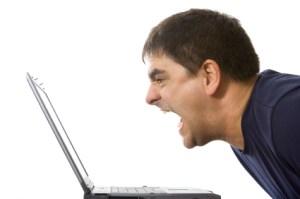 Time was, companies knew how to keep track of their important customers.

First, they set up loyalty programs: computerised systems that tracked the monetary value of everyone who shopped in their stores or flew on their planes or ate at their restaurant. When a high spender made a booking, the company was alerted to their status and they were treated accordingly. Frequent fliers got upgrades and champagne, frequent diners got a visit from the chef at their table – that kind of thing. Anything to ensure that the money kept flowing.

And then there was the other way of measuring worth: celebrity. It was understood that if you were (in order of importance) in movies, or on television or a journalist with a significant audience then you would get special treatment too, often for free. Brad Pitt doesn’t have to mingle with the plebs in the American Airlines lounge, Courteney Cox doesn’t wait in line at the bank, and the New York Times restaurant critic never has to wait a month for a table at Le Bernardin. If you’re a business, all of this makes perfect sense: high paying customers are the ones who keep you in business, and celebrities are the ones who guarantee positive mentions in the press. No one messes with Oprah.

And for decades the system worked.

Sure, the rest of us often found ourselves treated like crap but what were we going to do about it? Write a letter to the company’s complaints department? Write a furious blog post? Post a negative review on Yelp? Ooooh – scary! The fact is that, even with Google making it easier than ever to find negative reviews, most large companies couldn’t care less about individual complaints. The average customer simply didn’t have the value, the cachet or the audience to cause more than the tiniest PR blip. A $10 gift certificate and a form letter from the head of customer services was enough to make everything better.

Frankly, I had absolutely no problem with this system. In fact it suited me just fine. For a start, I’m a journalist, so people are generally nice to me. But more importantly I’m a Brit and, as such, any reminder of our old class system – hereditary peers making the rules and peasants knowing their place – makes me feel warm and fuzzy inside. None of your Thomas Jefferson ‘we hold these truths to be self-evident’ colonial bullshit.

So can imagine how horrified I was when I picked up a newspaper and realised that something was starting to go very wrong with the established order of things.

Two weeks ago, Kevin Smith – the film maker who brought the world Clerks, Chasing Amy and the character of Silent Bob – was flying from Oakland to Burbank on Southwest Airlines. Smith, as fans will know, is a big guy to the point where he frequently books two seats when he flies. On this occasion though, there was only one seat available on his flight, so he booked that. Which is where the problems started.

Despite having checked Smith in and allowed him to board, the Southwest flight crew suddenly decided – just before takeoff – that he was (in his words) ‘too fat to fly’. In front of hundreds of passengers they escorted him off the flight. None of the crew realised he was a celebrity – he’s really only famous to stoners and people who have watched Die Hard 4 – so to them he was just a fat dude who needed to be dealt with.

In response to his treatment, Smith did what you’d do, and what I’d do: he Tweeted about it. Not once, but a billion times.

Dear @SouthwestAir – I know I’m fat, but was Captain Leysath really justified in throwing me off a flight for which I was already seated?

Wanna tell me I’m too wide for the sky? Totally cool. But fair warning, folks: IF YOU LOOK LIKE ME, YOU MAY BE EJECTED FROM @SOUTHWESTAIR.

So, @SouthwestAir, go fuck yourself. I broke no regulation, offered no “safety risk” (what, was I gonna roll on a fellow passenger?). I was..wrongly ejected from the flight

Thank God I don’t..embarrass easily (bless you, JERSEY GIRL training). But I don’t sulk off either: so everyday, some new fuck-you Tweets for @SouthwestAir.

…and on and on, to his 1.6m + Twitter followers, many of whom of course retweeted each and every message. But it didn’t stop there: before long, a host of major news sources had picked up the story – including many who would never normally write about a cult film maker getting bumped from a flight. The LA Times headline summed up the angle most of them took: Kevin Smith’s Southwest Airlines incident sets Web all a-Twitter.

And that’s when I realised something interesting, and terrifying: Smith’s involvement wasn’t the reason the story was deemed newsworthy; Twitter’s was.

Don’t believe me? The following week, across the pond and at the other end of the follower spectrum, my friend Robert Loch, founder of the Yes And Club, started his own Twitter fight. His target: One Alfred Place – a members’ club in London that offers work space for entrepreneurs. The club has recently brought in a new CEO to revitalise its fortunes and her first act was to start axing members who were using facilities too frequently. One of those members happened to mention to her friend Robert that she’d been booted, prompting him to go into battle on her behalf – writing a scathing blog post about the club and tweeting the URL…

My thoughts on One Alfred Place’s appalling treatment of its members. http://tinyurl.com/yds97lm

Robert only has a little over 1300 followers, but – as with Kevin Smith’s Southwest embarrassment – the story struck a nerve with enough of them (me included) that we began to retweet it. As did people who saw our retweets, and people who saw those, and so on. By the end of the day, Robert’s tweet had spread far enough that he was contacted by reporters from most of London’s major business publications, all wanting details on the “Twitter revolt” that he;d sparked. Again, it didn’t matter that Robert wasn’t himself particularly newsworthy: Twitter was the angle that interested them.

You don’t have to look far for dozens more examples of this journalistic trend. Just type “twitter sparks…” (no quotes) into Google News and you’ll find dozens of headlines where Twitter’s involvement in an otherwise mundane corporate failing has propelled it to the pages of the mainstream media. A random, recent example from those results: “Artist sparks Twitter campaign against Paperchase over disputed design” – another UK-based story, this time concerning ‘Hidden Eloise’ an artist who noticed that the upscale stationery company ‘Paperchase’ had apparently ripped off one of her designs. She took her fight to her 1,000+ followers and before long the story had been retweeted enough times to become a trending topic. The Guardian quickly picked up the story and forced Paperchase into issuing an embarrassed apology to the artist, and taking steps to make things better.

Two years ago, none of this would have been news. A cult film maker was kicked off a flight? So? What was he going to do? Make a film called ‘Jay and Silent Bob hate Southwest airlines’? (Admittedly that would still have been better than Jersey Girl). An entrepreneur’s got quietly kicked out of a members’ club to make way for more profitable clients? Tough shit: that one’s not even newsworthy enough for the most desperate trade magazine. A little known designer gets ripped off by a gigantic retail chain? Boo hoo. Tell it to someone who cares. Without a major celebrity angle, there was little to no chance of the media picking up a run-of-the-mill intellectual property complaint and forcing the company into action.

But today it doesn’t matter who you are or how many fans you have. You can have 1.6m like Kevin Smith or you can have 1000 like Hidden Eloise. All that matters is that a) you have a story that tweaks people’s ‘David vs Goliath’ nerve and that b) you get enough people retweeting it that the mainstream press can paint it as a ‘Twitter campaign‘.

In the past few months Twitter has been promoted daily on network news shows, it’s been name-checked by Hollywood A-Listers – hell, it was even mentioned in Dan Brown’s latest book; wedged in right at the end to keep da kids interested. The result: Twitter itself has become an A-list celebrity. And like with any A-list celebrity, any story that even tangentially involves it is automatically newsworthy.

This presents an enormous problem for companies. If Twitter campaigns are inherently newsworthy then anyone with a Twitter account and a gripe against you has the potential to become your biggest global PR nightmare. Pissing off Joe Twitter User is just as dumb, from a PR point of view, as upsetting Will Smith or Donald Trump.

Sure, I can hear the response from CEOs and heads of PR. “Oh, it’s ok, we’re on Twitter already – if anyone complains we reply to them straight away. We have an intern dedicated to it.”

Southwest Airlines is on Twitter, One Alfred Place is on Twitter – even Paperchase finally dragged itself on to the bandwagon a couple of weeks ago. The problem is, official responses, even if accompanied by some kind of grand gesture of apology, do little to quell a Twitter storm once it has started. The phenomenon of mass retweeting means that – to paraphrase Churchill – a complaint makes it half way around the world before the official company response has time to put its pants on. Or as the CEO of Paperchase put it to the Telegraph: “I am sure it can be beneficial but if you get an untruth (on it) it can be very dangerous.”

In all areas of their business they’re going to have to make sure they’re purer than pure; they’re going to have to examine every one of their processes to ensure that no one is getting screwed over. Moreover, they’re going to have to treat every complaint like it’s the most important complaint they’ve ever received, lest the complainer take their fight to Twitter. In other words, if you’re going to kick someone off a plane, you had better be sure you’re kicking them straight into the VIP lounge with a huge gift certificate and possibly even a hot stone massage. Because all of those things are cheaper than cleaning up the mess afterwards.

Of course, as a Brit, this horrifies me. I mean, the idea that everyone, regardless of their wealth or fame, should be treated equally by companies just smells a bit… well, French. Quelle horreur!

But as a customer, I have to admit that it’s about bloody time.