One of the more frustrating things about shopping for electronics is the fact that many devices don’t hold their value for very long — you can’t typically buy a cell phone and expect to sell it for $200 a year later. At least, that’s how it used to be. Now Palo Alto-based startup Ztail is teaming with online mobile phone retailer LetsTalk to do exactly that for mobile phones: buy a phone through LetsTalk, and Ztail will tell you on the spot exactly how much money they’ll give you 18 months down the line if you want to sell it back.

Here’s how it works. LetsTalk now features a ‘ValueLock’ banner for the vast majority of its phones, including popular devices like the Motorola Droid (ValueLock is essentially a branded version of Ztail’s service). Each phone has a ValueLock Price, which is the amount Ztail will pay if you decide to send in your phone up to 18 months later (this price is the same no matter when you send in your phone, up to the 18 month cutoff). The catch is that in order to redeem your ValueLock deal, you have to purchase your next phone through LetsTalk too. The site appears to have competitive prices, so this shouldn’t be a huge deal.

From what I can tell, Ztail is offering up some good prices for the used phones. The ValueLock price for a Droid is set at $196, which is nearly $150 more than you pay for the phone up front with a 2-year Verizon contract (and remember, you’re going to get that after using the phone for 18 months). After sending in your device, Ztail sends you your money either through check or PayPal. And CEO Bill Hudak says that trade-in phones don’t have to be in mint condition either — it just can’t have obvious flaws like water damage, cracks, and missing buttons. And, in the event that Ztail goes under some time after you buy your phones, LetsTalk will still back these pricing guarantees.

So how does Ztail make money from this? First, they receive a commission for every user that buys a phone and then decides to sign up for the ValueLock service, which only requires an Email address and takes a few seconds to do. Hudak says that during a trial run 30% of customers who were eligible for ValueLock signed up for it (they’re prompted to both by an Email from LetsTalk and a card sent alongside each device). Ztail also gets a substantially larger second commission down the line if the customer sends in their device through ValueLock and purchases their next phone through LetsTalk.

This is big news for Ztail — LetsTalk is one of the web’s largest phone retailers, with over $100 million a year in revenue and hundreds of thousands of activated phones sold each year. Ztail has been working on this pseudo-insurance model for nearly a year, and it also has more large partnerships in the works (it’s also worth pointing out that LetsTalk powers the mobile device store on WalMart.com, so it’s possible that their partnership may extend there) . Prior to launching this business model, Ztail had previously focused on streamlining eBay listings and also launched a ‘Kelley Blue Book For Everything” in 2008.

If you’d like to try out the system for yourself, Ztail is going to offer a $230 ValueLock price on the new Motorola Devour to TechCrunch readers (use the code ‘TCDEVOUR’ when you sign up for the service). The normal ValueLock price for the phone is $168. You can read our review of the Devour here. 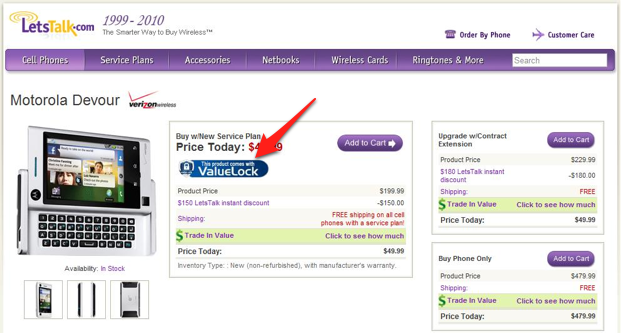