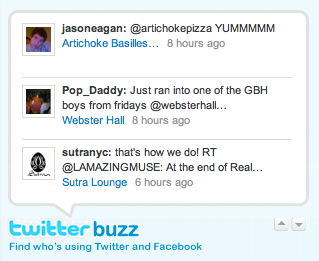 Twitter is becoming a serious marketing vehicle for local businesses. Everyone from your local baker to your favorite restaurant is getting on Twitter to talk to customers and draw in new ones. Just last weekend when I was driving to Vermont with my family, I sent out a Tweet asking for a good place to eat lunch. I got more than five responses, including one from a local innkeeper couple recommending two spots in town (not owned by them). That was in Brattleboro, Vermont.

But that was so random. How do you even find out which of your favorite local businesses have Twitter accounts or what their Twitter handles are? Well, CitySearch is doing it for you. The local business guide is starting to build out a definitive directory of Twitter accounts and Tweets about local restaurants, hotels, spas and stores. It is starting small, with about 5,000 business listings currently tied to their Twitter accounts (which businesses can add themselves when they claim their CitySearch page), but its aim is to add Tweets by and about any of the 15 million businesses in its listings.

Every page on CitySerach now prominently highlights a Twitter Buzz widget on the upper right hand corner of the page showing recent Tweets about businesses in your city. If the business has a known Twitter handle, recent Tweets with their @handle (their Twitter name) will show up above the user reviews. These include both Tweets from the business and Tweets that mention the business. For instance, apparently people love @artichokepizza and the “calzones are off the chain too!” Chelsea Piers also gets a lot of Tweets.

“It really lowers the threshold for reviews,” CitySearch senior VP Kara Nortman tells me. It also makes the reviews more immediate, and therefore relevant. I’d much rather know how a chef’s Mahi-Mahi is going over with diners today than last week when a different chef might have ben on duty. Since it started rolling out the local Tweets a couple of weeks ago, engagement metrics are noticeably higher across the site: session durations are up 10 percent, pageviews per visit are up 7 percent, and exit rates are down about 3 percent. 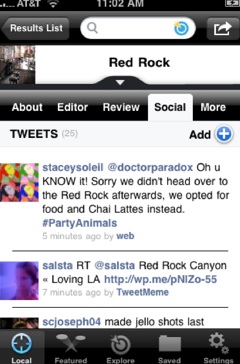 In addition to being able to look up businesses by name, CitySearch has Twitter directories of local businesses by city. So far there are only 820 in New York City and 281 in San Francisco , but CitySearch is just getting going. Any business with a Twitter account can add their account to their CitySearch page. In fact, they can sign up for a Twitter account while they are at it right from within CitySearch and use CitySearch as a Twitter client. Also, right now CitySearch is only showing Tweets that explicitly mention the @handle a business uses on Twitter. Over the next few weeks, CitySearch will start to surface Tweets that mention the business whether or not the @handle is used. So those 5,000 listings should expand quickly.

Nortman says that the Twitter business directory was inspired by CrunchBase, our own directory of startups, people, and venture capital firms. She wants it to become the definitive directory of Twitter business accounts. CitySearch is in a unique position to build this because it already has millions of local businesses in its database. All it needs to do is associate Twitter accounts and related Tweets to each business, and it can slice and dice them by city, neighborhood, or type of business. An update of its iPhone app which is making its way through the App Store approval process right now will double as a Twitter client and let you Tweet out your reviews from the app. It will even have a social tab showing all the Tweets about a business (see leaked screenshot at right). Sentiment analysis is also on its way, which will let consumers see which restaurants and stores are trending with positive or negative vibes lately.

Once the Twitter directory is built out, it and the resulting Tweet stream will become available to developers through its new CityGrid APIs. It could also make it easy for consumers to create Twitter lists of their favorite local shops and restaurants, or curate their own lists and maybe even charge on a clickthrough basis. But maybe it should wait for Twitter to define its advertising rules before committing to any one model. 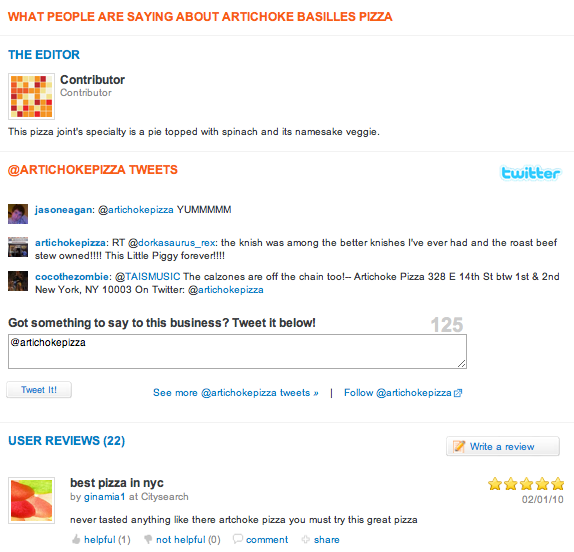