Looking at blogs and news sites across the web, it’s clear that many have robust communities with eager, intelligent people looking to contribute. But up until recently, the only way most sites (particularly blogs) allow users to share their thoughts is through comments, which work well enough, but certainly aren’t always perfect. Grogger is a new service that looks to help sites tap into this community knowledge, allowing you to build a site that includes posts written by both you and your audience.

At its core, Grogger is an easy-to-use blogging platform, but rather than only exposing its editing tools to a handful of site administrators, they’re shown to everyone. When a user comes to your Grogger site and writes an entry (called a Grog), you can have it directly posted to your blog, or added to a moderation queue, where your site administrators can approve it. Once an entry has been approved, other users can vote it up using a ‘Like’ system, and administrators can ‘feature’ it to make it even more prominent. And while readers are free to contribute their own Grogs, they can also leave old-school comments under posts by other writers.

Grogger tracks each user’s profile over time, allowing you to quickly look up all of their previous posts. You can also elect to only follow certain writers if you want to tweak your reading experience (and Grogs can be broken up into categories). Frequent contributors are rewarded through a badge system. The site has only one theme available at this point, but more are coming in the near future, and you can manually edit the CSS if you want to get creative.

Grogger is still pretty early on (I ran into a few bugs, and some of the UI isn’t that intuitive), but it’s got potential. The site is now open to the public and is free, with plans to eventually roll out some premium options. 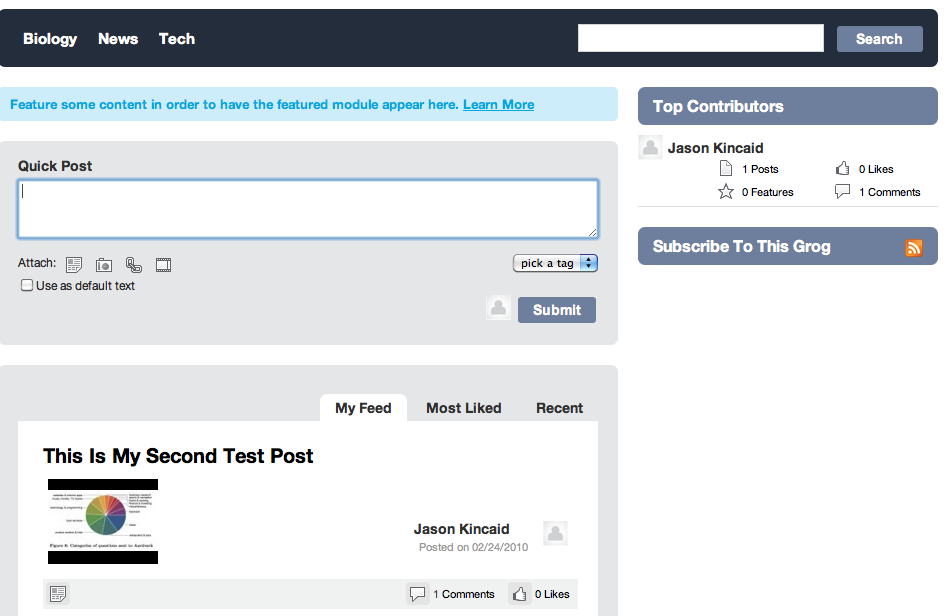