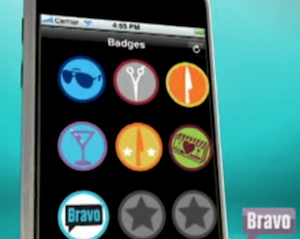 First Google, now Foursquare. Hot on the heels of Google’s first Search television ad (run during the Super Bowl, no less), the location-based social network Foursquare is gearing up to do the same thing tonight.

In a tweet sent from their main Twitter account, the Foursquare team notes a “rumor” that an ad for their service will be running on Bravo tonight alongside the show Sheer Genius from 9 to 10 PM. But it’s not a rumor, we’ve seen the ad (and have embedded it below for your own viewing pleasure). It’s a 20-second spot made by Bravo for Foursquare to highlight their recently announced a partnership that allows the network to point out locations from its shows that let fans who use Foursquare (or their own Guides By Bravo app) go to them in the real world. This is believed to be one of the deals currently earning Foursquare some revenue.

While the company is making some revenue, it’s not yet profitable, and the focus remains on building the product and gaining users. Currently, Foursquare is closing in on 500,000 users, but with a cable television commercial, those numbers could soar.

The service is in the process of revamping its website and several of its mobile applications. A new version of the iPhone app, which launched one year ago at the SXSW conference will hopefully be ready in time for this year’s SXSW, we’re told.