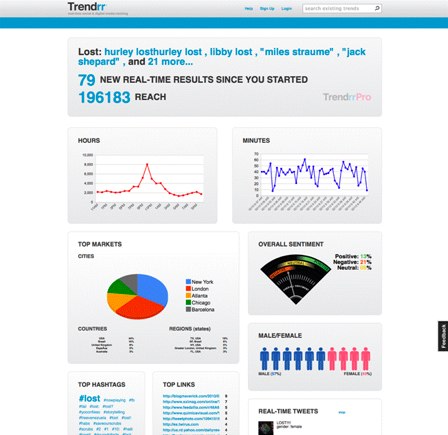 As the presence of television content on the web increases, the entertainment industry needs applications to measure the content’s performance. Wiredset’s Trendrr, a comprehensive digital data tracking platform, is launching a new realtime dashboard catered to TV networks.

The new tracking platform, which is available to any Trendrr Pro users, allows film studios, networks and record labels to track and aggregate data surrounding their properties and gain instant insights on location, gender, volume, sentiment, and influence as the conversation takes place. The application gathers data from over 50 of the web’s social destinations, including Twitter, Facebook, MySpace, YouTube, Last.fm, Amazon, Craigslist, and eBay, and delivers users a realtime view of data within a dashboard.

The idea behind Trendrr’s entertainment-focused dashboard is that it will allow the film and television industries to gain actionable intelligence to determine future content decisions. For example, the new application will show a television network is gaining the most reactions by city, if the chatter is positive, and what aspects of a show are gaining traction among viewers and which segment of the population is most receptive to their content. Not only will this data help users determine where to place certain content, but can also help with advertising and marketing strategies. The application is already being used by TV Networks such as NBC Universal’s Oxygen, which is using it for the show, Bad Girls Club.

The application will undoubtedly be useful to to measuring engagement on the web, especially on social media sites like Twitter, Facebook and YouTube. However, Trendrr is entering a space where many others are attempting to launch innovative applications. Scout Labs, Viralheat, PeopleBrowsr and Radian 6 are just a few of the startups that are helping companies, including media organizations, attempt to track movement across the web.