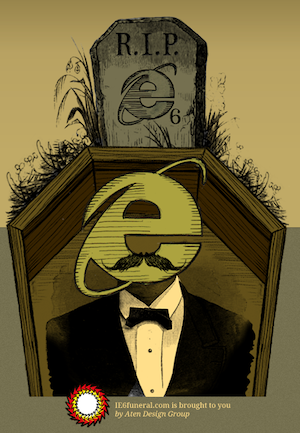 Slowly, but surely, Internet Explorer 6, long the bane of many a web developer, is dying. And you’re invited to its funeral.

A Denver, CO-based design company, Aten Design Group, has built a site to mark the occasion. At IE6funeral.com you can RSVP as to whether you will be able to attend the funeral service or not. It’s at the company’s headquarters in Denver, but those who aren’t able to attend in person are being asked to send flowers. For those who can attend, “Funeral attire is encouraged.”

Sadly, this funeral will not actually be the last we heard of IE6. While Google Docs may be ending support on March 1, YouTube won’t kill it off until March 13. And then of course there are tens or hundreds of thousands of sites out there that not only support IE6, but in some cases are built specifically for it. It’s going to be a hard sucker to kill. But at least a funeral will provide some closure until we find the body.