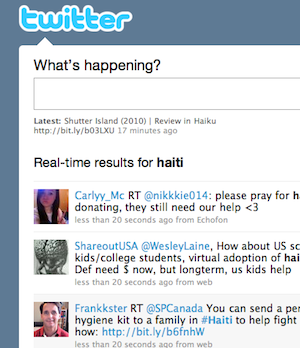 Following the disastrous earthquake in Haiti earlier this year, a number of web companies have been setting up special programs to try and do their part to help. Twitter has been one of the most active, as the company has made great use of its social graph to get the word out on how to help through donations and other means. Now they’ve done something else.

Twitter was able to strike a deal with Digicel to bring free SMS tweets to Haitian citizens (who use that carrier). Previously, people in the country would be charged a messaging fee each time they tweeted, so obviously this will help them communicate with the outside world a little easier. And it’s very simple to set use even if you don’t have a Twitter account yet. As co-founder Biz Stone writes today on the company blog:

To activate the service, mobile phone users in Haiti can text follow @oxfam to 40404. Accounts are created on the fly and any account can be followed this way.

Stone credits Twitter mobile lead Kevin Thau with striking the deal. He’s also been the one behind similar deals in several countries around the world such as India, the UK, and others. This is part of Twitter’s broader plan to go back to its SMS roots to enable people around the world without broadband access or smartphones to use Twitter easily.