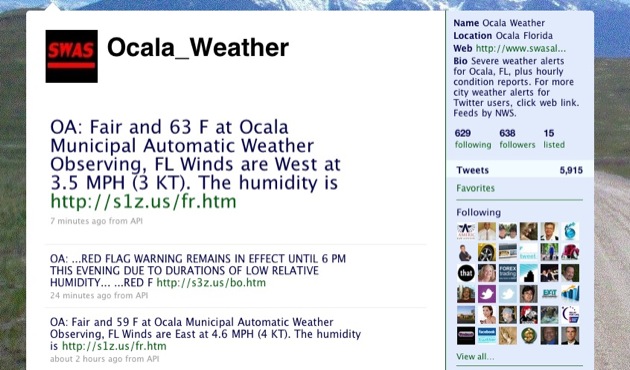 A young man by the name of Dave Osborne built an interesting project called SWASAlert, a super-speedy weather severe alert service that supplies super fast weather alerts via Twitter and SMS. The easiest way to try it is to pop over here and select your city. You’ll then receive instant emergency weather updates straight into your TweetStream.

Weather seems to be overlooked in the hyperlocal news world so projects like this, however oddly constructed, are an important addition to the mash-up ecosystem. Osborne recounted the genesis of his product thuswise:

I had a friend in Minnesota complain to me about a year ago that the tornado warning got to him about the same time that the tornado did, and he asked why nobody had developed a faster system. We checked into it and the only valid claim we could verify was Superfeedr which was about 15 minutes for fetches. this was the primary impulse or inspiration to build our system.

What we have here, then, is a good, old-fashioned mash-up. Osborne makes most of his money now from advertising and deals with about $1000 or so in costs to keep up the service and the timely feeds.

This is obviously not for everyone – I suppose if you live in a high traffic tornado area, this would be great, but for the rest of us “34 degrees and it may snow later” is enough of a weather report for the whole day. However, airplane pilots and the weather-obsessed may find SWASAlert quite useful.