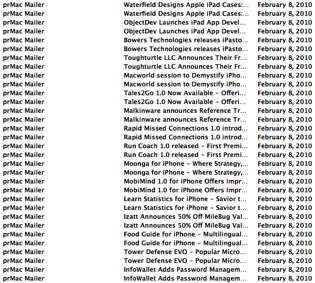 It’s no secret that we consider the PR industry, for the most part, the bane of our existence. They’re just under too much pressure to get results, and when we don’t do what they want (write about their clients), things turn ugly. And before things turn ugly, we get spammed. By phone, by Twitter, by Facebook, by email, by mail and by fedex. Some PR firms will lie, cheat, manipulate and then just smear your reputation to get what they want.

Today something new happened though. It wasn’t a PR firm we went to battle with, it was a press release distributor – prMac. I know these guys well, because for the last year and a half they’ve sent me an average of 15 emails a day, sometimes far more. Each email contains a useless press release that someone paid them to spam out to the media. As far as I know, not one of these emails has ever turned into a story.

Most PR emails come from a human, and it’s easy to just reply and tell them to stop if it becomes annoying. The more streamlined operations that spam stuff out at least give us an opt out to get off their dreaded mailing list. But not prMac – none of their emails have an opt out.

Today was the day I decided to take a stand against the onslaught of prMac emails. Some small step in my hope to regain human dignity, I guess. Since there was no opt out, I simply sent out a Tweet, saying “prMac really needs to chill out on the unsolicited press spam, and give an unsubscribe link.” I followed up with a link to a single day’s emails from the company.

If I were prMac, I would have seen this and either kept on spamming, or quietly taken techcrunch emails off their list. But that didn’t happen. Instead, they got angry. Really pissed off, actually.

First came a comment to that image of the spam, saying “Claims it’s spam, but OPTED IN to the service. The reason for the duplicates is TechCrunch provided two email addresses.”

Then a barrage of emails (sort of ironic). One said in part, and I’m not kidding, “prMac is an OPT IN service for the media. We’re not spammers. We set up your account for you, only for your convenience and under your behalf…”

Yep, they followed a statement that they are opt in only and that they aren’t spammers with an admission that they set up our account for us “only for your convenience” (and certainly not at our request).

Unpleasant words were exchanged over the course of ten or so more emails. prMac forwarded an email from 2008 where they cajoled a CrunchBase staffer into giving up our emails to start the whole process. I noted that I had no way of stopping the barrage, and kept pointing out that a simple opt out in each email would have been so…legal of them.

But by far the most perfectly absurd comment came from prMac in one of their last emails, where they said to me “…you seriously need to take some diplomacy lessons my friend. The smart ass remarks aren’t assuaging me one iota, and only making a situation worse than it didn’t even have to be.”

Indeed. And since I want to become a better person, I’ve enrolled myself in a course on how to be diplomatic with spammers who don’t want to let go. Hopefully, I’ll handle the situation with more finesse next time.

In the meantime, though, the whole PR profession really needs to get a grip. We aren’t here to do their bidding. We serve our readers. At least, the readers we like. And our community. If they want to be part of that community, they need to lose the sense of entitlement and chill out on the aggressive marketing a little bit.

I would have been quite happy just venting on Twitter earlier today and eventually setting up an email filter to remove anything that came from them. But we’re only human. And this tirade of angry emails (just now yet another one from them popped into my inbox – “If your receiving distributions from us were such a problem, when didn’t you bring this up long before?? It’s not like we started doing this yesterday.”) was a little too aggressive and a little too much. So now I’ve vented more fully.