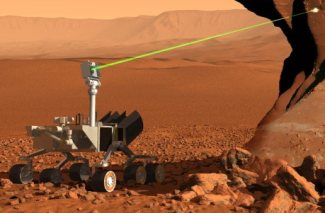 Apparently NASA saw something when they sent up the last Mars rover, because the next one is going to be packing heat. The next rover, named Curiosity, is scheduled to launch next year and will be equipped with an analysis system that uses high-energy laser pulses to help find out what Mars is made of.

The system, called LIBS, is currently used as a forensics tool that determines the chemical composition of materials by reducing them to a molecular level by blasting it with a laser. While it sounds pretty sci-fi, it’s actually quite harmless. The laser will vaporize a small crater in the sample, which turns the material into a plasma, which is then analyzed to determine exactly what the chemical make-up of said sample is.