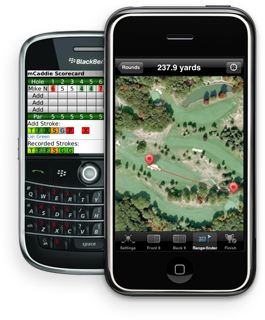 AccelGolf, a startup that looks to help golfers perfect their game with the help of mobile applications and an online analytics platform, has raised $600K in angel funding. The company was part of the TechStars class of 2009, which was held in Boston.

AccelGolf offers native mobile applications for iPhone, Android, and BlackBerry users. Using them is pretty straightforward: rather than jotting down your score for each hole on a piece of paper, AccelGolf’s apps allow you to also record both the club you used and the terrain type (tee, rough, green, etc.) you were hitting from. The whole process only takes a few seconds, so it shouldn’t slow down the speed of play much.

CEO William Sulinski says that over time, this information can be used to help players identify what their weaknesses are, which clubs they should be using, and other key information. I’m not much of a golfer myself (it seems like it should be pretty intuitive to figure our your weaknesses), but Sulinski says that this data can be extremely valuable, and will be even more so once AccelGolf fleshes out its web-based analytics platform, which features various graphs and tables tracking your performance.

The company currently has around 45,000 active users on its mobile applications, many of which are on BlackBerry. The apps are currently free, but AccelGolf plans to roll out a premium service in the near future. Sulinski also says that AccelGolf eventually plans to expand to provide analytics for other sports (though it sounds like that’s still a ways off).

The company has also recently opened an API that allows other developers to tap into the platform.