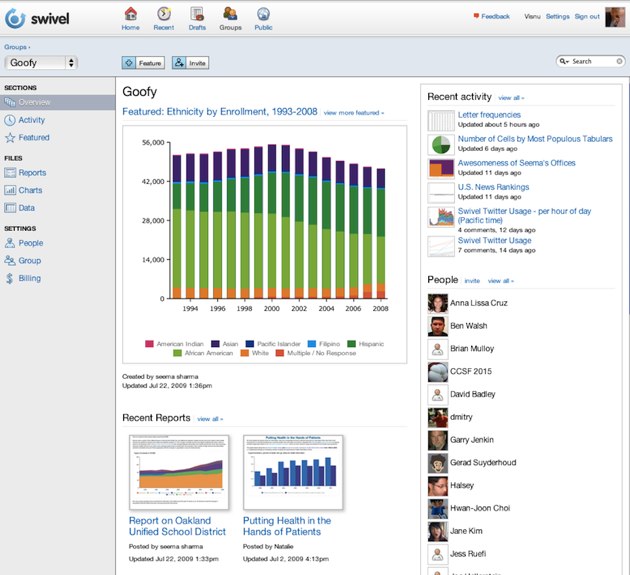 We’ve long been fans of Swivel, a service that lets users upload, manipulate, chart and share data. Our first post about them, in 2006, was titled Swivel Aims To Become The Internet Archive For Data. But with their newly launched groups feature, Swivel can now be the data archive and metrics dashboard for the enterprise, too.

Before groups data uploads were either private (in draft mode) or public. A big use for Swivel was embedded charts of publicly available data, particularly for press and media (we’ve used Swivel charts often).

With the new groups feature, data can be shared among small groups of people, like office documents in Google docs. And Swivel is also adding the ability for users to automatically upload data feeds from Google Analytics, Google Docs (spreadsheets), and Salesforce. Integration with Intuit Quickbooks is coming soon.

By adding data feeds to private groups, businesses can create customized metric dashboards that can be shared within the organization. Website metrics, sales pipelines and other data can be shared on a single dashboard and updated constantly via data feeds. And it takes just a few minutes to set something like that up.

This isn’t free, though. After a fifteen day trial period Swivel begins to charge for groups. The number of users isn’t a factor in the fee, but the number of reports, spreadsheets and charts are. Fees range from $12/month to $96/month, based on usage.

There’s still some work to be done with the user interface to make things more intuitive, but Swivel does provide overview videos of the various features that help users get a feel for how to get things done.

This is the kind of thing that Google Apps should have built already to help companies see what’s going on with their business based on a variety of data sources. I won’t be surprised to see Google buy or clone Swivel sometimes in the future.