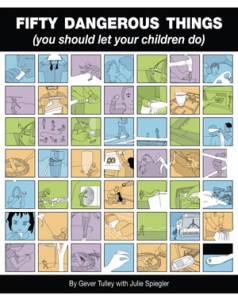 Last week I met Gever Tulley, author of the provocatively-titled “Fifty Dangerous Things You Should Let Your Kids Do.” The book grew out of a 2007 TED talk about why embracing and exploring danger ultimately lessens it. (See! Good things do come out of TED. Let the TED-TechCrunch healing begin!) The book doesn’t advocate playing in traffic, but it does extol the virtues of things like super-gluing your fingers together, boiling water on the stove in a paper cup, and putting metal in the microwave.

He talked about the decrease in “tinkering” in America and linked it to Americans seeking an appearance of affluence, i.e. only poor people would try to fix their own sink, anyone else would call a plumber. Tulley is a big believer that this is bad for kids and by extension the country. I’ll take it a step further—I think it’s bad for American entrepreneurship.

There’s something about that tinkering, playing, hacking ethos that is core to what makes Silicon Valley, and entrepreneurship in general, exist. Nearly every tech visionary landed in trouble at some point for hacking, cracking video game codes, or phreaking– everyone from Steve Wozniak to Max Levchin. It’s the same mischievous curiosity that gets so many people excited about each year’s Maker’s Faire and the same desire that causes someone to jail-break a several-hundred-dollar device to see what’s inside or even toss one in a blender. It’s a core curiosity that adults have or they don’t, but almost all kids naturally have it. It can have risks, sure. But it also encourages creative problem solving, how to work within constraints and what rules can be broken and which shouldn’t.

I met Tulley because he was a guest on NBC’s Press:Here yesterday. He found it a nice change from The BBC, where interviewers excoriated him for encouraging kids to do something that could hurt them. And, well, that’s not surprising when you consider the British stereotype of restraint and aversion to risk and failure. Similarly, last November, when I was in India several Indians told me a big advantage the United States has enjoyed in business is that parents let their children fall down when they were young, encouraging an acceptance of set-backs and failure. In India there are protective bubbles of parents, grandparents, aunts and uncles who keep any harm from coming to kids.

Clearly, the important thing here is the line. There’s a difference between doing something unethical or harmful to another person and (literally) playing with fire because you wonder how quickly something might burn. But in an America that’s increasingly fear-based and protectionist a little danger, risk and failure might be just the thing the younger generation needs.

Tulley himself seems to practice what he preaches. He showed up to the set on crutches. How’d he hurt himself? Not skydiving or running with the bulls—he was just walking down the street.