Google is already taking a page out of Twitter’s playbook with the recent launch of Buzz, which lets everyone on Gmail broadcast public status updates, share links, blog posts, photos, videos, and more. But Google, which tried and failed to buy Twitter last year, is still studying its various features and building some of them into its own services. The next one it might borrow from Twitter is trending topics. Twitter exposes the keywords people are using the most or growing fastest at any given time under Trending Topics in the sidebar or in Twitter search.

Now some people are noticing similar trending topics in the left sidebar of Google News when they are logged in. Joe Hobot captured the screenshot at left on his blog. Some of the trending topics earlier today were “Greece” (which is considering an economic austerity plan) “Iran” (which is facing U.N. sanctions over its nuclear program), “Mobile Technology” and “smartphones” (no doubt due to the Mobile World Congress kicking off in Barcelona today). Google already shows the relative popularity of news topics in Google Trends, but showing them in Google News is probably more helpful.

The trending topics, though, appear to be part of a larger redesign. We’ve been getting other reports and images of a Google News redesign bucket test. (See image below). The redesign also has personalization options which let you customize Google News by location or category (business, world, etc.).

Of course, MyYahoo did this ten years ago, but it’s good to see Google News finally getting around to letting people personalize their news pages.

Update: A Google spokesperson confirms it’s been testing the new design since early February: “At Google, we run anywhere from 50 to 200 experiments at any given time on our websites all over the world. Right now, we are running a small test of a new Google News homepage design.” And Search Engine Roundtable posted a similar screenshot on Friday. 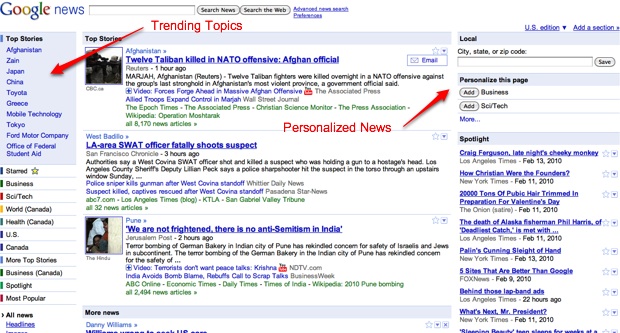