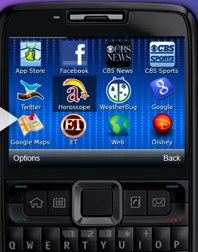 HipLogic’s smartphone interface for non-smartphones recently made news when the startup rolled out a consumer version of its downloadable application that delivers content—including Facebook, Twitter, CBS news, CBS sports, and weather—to select Windows Mobile or Symbian devices. HipLogic is centered around the promise to bring the feel of an iPhone interface and app store to non-smartphones. Today, the startup is launching support for Android to allow mobile phone manufacturers, carriers and operators to customize their interface with HipLogic Live’s application.

HipLogic’s Android Platform is designed to be used by companies like Verizon, BestBuy, or Orange as a branded phonetop/phonescreen interface that connects to the web. Along with customization, HipLogic allows operators to choose which content to include in the interface, and the ability update the services and applications on the device remotely. Within the HipLogic interface, consumers can toggle between the original mobile operating system and the HipLogic interface for access to a collection of apps. But apart from creating a branded interface, HipLogic’s offering may not add too much to an interface that is already at the top of the line for smartphones. The beauty of HipLogic’s interface is that it brought the feel of a more advanced mobile phone to a non-smartphone. This isn’t the case with the Android platform.

HipLogic’s application platform features a lightweight virtual machine connected to the cloud which enables on the fly updating, and aggregates info from network operators and the web to create mash-ups on mobile devices. Of course, for its offerings to really take off, HipLogic will need to partner with retailers and phone developers like the ones mentioned above to create these branded interfaces. Formerly known has Numobiq, HipLogic has raised $11.5 in funding, recently adding $7 million to its coffers. HipLogic faces competition from China’s Borqs.