If you’ve ever tried to use Twitter Search, you know that it’s got some pretty serious problems. First, the site only lets you search back through a couple weeks of tweets. Even worse, the service doesn’t seem to employ any relevancy algorithm to speak of — you just see the most recent tweets that contain your query’s keywords, regardless of who said them (which oftentimes yields junk and spam). Today Topsy, the startup that views tweets as the currency of the web, is launching a handful of new features that improve on the official Twitter search in almost every way.

Up until now, Topsy has been based entirely around links. When you visited the site, it would prompt you to enter a search query, and then would display a list of links most relevant to whatever you searched for. The links are ranked by the number of times they’ve been retweeted, and also by the influence of the people who have tweeted them;  the site actually keeps track of the number of retweets each user typically gets to establish their overall reputation. Now, Topsy is taking this reputation system and extending it beyond just links, allowing you to search for both photos and tweets that don’t contain links at all.

So what does that mean? Before now, if you ran a search for “Google Buzz”, the site would return links to articles and videos about the new service. Now, it will also surface tweets from influential Twitter users, even if they don’t include a link. That’s important for breaking news when a story may not have already been covered by a publication, or when there’s a tweet that’s important in and of itself (say, Bill Gates’ first tweet). You can view just these tweets using the navigation menu at the top of the screen, and important tweets will also be included in the site’s flagship web search, alongside links and photos (more on that later). You can filter these results by time, sorting by Hour, Day, Week, Month, and All Time (which represents 18 months of data). 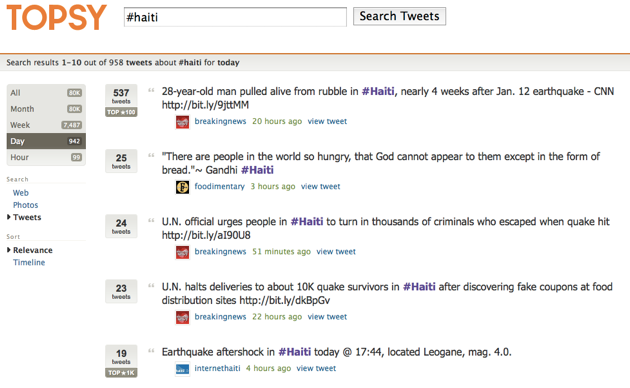 This new search functionality for linkless tweets comes with one big caveat — it will only count retweets that use the native Twitter retweet functionality, which has been pretty controversial. Native retweets don’t allow users to append their own comments to a retweet, and they’re still only used around 10% as often as the “old school” retweet functionality. That said, the Topsy team says they will eventually be tracking all retweets, though it may take a while.

The other big addition to the site today is support for photo search. This searches the text of any tweet that contains a link to a photo, and then presents all matching photos in a thumbnail view similar to Google Images (as with links and tweets, these are all ranked according to Topsy’s reputation system). Because these are pulled in in realtime, the results can be more useful and timely than what you’d find on other image search engines. That said, they can also be pretty quirky. For example, I ran a query for “airplane” and got results of a guy hiding his head in a sweatshirt (on an airplane), a photo of an airplane safety manual, and a photo of a guy wearing a banana suit (again, on an airplane). Queries appear to work better if they’re related to a current event. But even if the results aren’t always perfectly on point, you can definitely have a lot of fun with them.

Finally, you can see the top trending items for all three search categories — web, photos, and tweets — in the “Trending” section, which sort of serves as a Digg for Twitter. And, for those who were asking for it, Topsy now supports RSS feeds.

This is a big improvement for Topsy, and I’ll definitely be using it as an alternative to Twitter’s official search. My concern, though, is that Twitter will probably be launching something similar in the future — its own search engine really hasn’t changed in years, and is ripe for an overhaul (especially since it’s now featured on the Twitter homepage). That said, Topsy has its search indexing over 18 months of tweets (search.twitter.com only has around two weeks of content), so that may help differentiate it from whatever Twitter releases. 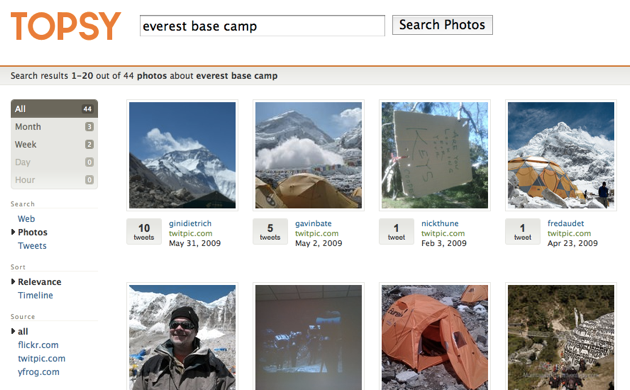