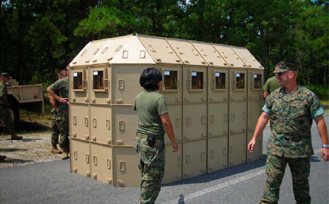 This is strangely cool. A defense contractor developed a type of steel reinforced armor that could replace the basic sandbag encampment. The armor assembles extremely quickly and is resistant to bullets, grenades, and IED blasts. It also takes about 10 minutes to put together without tools. It really is amazing the new technology that is coming out for the military.

The McCurdy’s Armor (named after a soldier who died in 2006) comes complete with gun ports, steel plated armor, and different levels of construction for different tasks. The Marine Corps has already bought 14 of the reusable units, however there’s no word if they are actually in use in any conflict areas. Seems like a great concept to me.