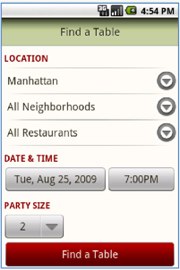 In less than six months, online restaurant reservation site OpenTable has seated an additional one million diners via its mobile apps. In late October, OpenTable had reached the milestone of seating one million diners via its mobile offerings, a year after its iPhone app launched. It took only four and a half months to seat another million diners. Additionally, the site says that based on an estimation of a $50 average check per diner, OpenTable claims that diners using its mobile applications have generated more than $100 million in revenue for its restaurant partners.

OpenTable allows diners to find and book reservations at more than 11,000 different restaurants in multiple countries via mobile applications for the iPhone, Palm, Blackberry and Android. Other smartphone users can book reservations through OpenTable’s mobile-optimized Web site.

Last year, OpenTable filed for a healthy IPO, despite recessionary conditions in the markets. OpenTable is a solid internet company that has a viable business model. On the restaurant side, OpenTable delivers reservation management software to establishments through a Web browser and collects monthly subscription revenues, similar in theory to the offerings that software companies like Salesforce sell to clients.