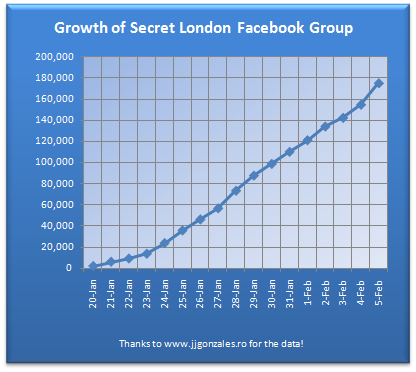 There’s a certain irony that TechCrunch’s in-house satirist Paul Carr is currently slaving over the sequel to his book about his failure to launch a startup. Fridaycities was to be a site which allowed anyone to swap information in real time about London, and eventually other cities. The site failed, Paul wrote his book (and a few other things, let’s admit) and the rest is history, including our little run in, thankfully.

If only he’d done it in the era of Facebook rise into the mainstream. Because today, two weeks after launching, the Secret London Facebook group has 182,010 members and counting and is poised to propel it’s 21 year old creator into her first startup.

Bristol university graduate Tiffany Philippou originally set up the group in response to a competition from ad agency Saatchi & Saatchi to win a mere summer internship. However, it seems unlikely that Tiffany will be too bothered. There’s now a holding page and Twitter account (@secret_london) as Secret London morphs into a full-blown startup.