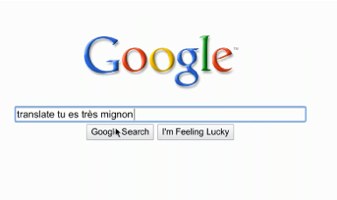 As predicted, Hell has indeed frozen over. Yesterday, Google CEO Eric Schmidt sent a tweet hinting at something most people probably never expected to see: a Google Super Bowl ad. But the contents of the ad, and even the product it would be promoting, remained a mystery. Moments ago some 90 million Americans watched as Google showed off the search functionality that it’s famous for, in an ad called Parisian Love. We’ve embedded the ad below.

Yesterday, John Battelle correctly predicted that the ad would be running during the Super Bowl.

Amid dozens of ads focused on cars, beer, and busty women, the Google spot definitely took a different approach: it tells a love story through a series of search queries. The tale begins with a query for “study abroad paris france”, moves on to “impress a french girl” and eventually makes it all the way to “how to assemble a crib”, showcasing Google’s technology in a way that pretty much everyone can relate to.