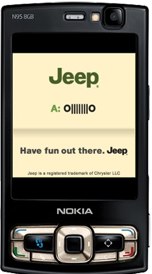 On the heels of the surprising news that Nokia’s Ovi Store delivers one million downloads per day, mobile ad network Greystripe is announcing support for Nokia’s very own app store. Although Greystripe supported Java downloads before, this is the first time they will be supporting Java apps in the Ovi store.

The Ovi Store is the centralized application shop for programs fit for Nokia devices that the Finnish mobile device giant launched in May 2009. Greystripe offers rich media ads through its ad network, and has seen considerable success with its iPhone platform, and recently launched support for Android to ride the tidal wave of growth for the device. Greystripe maintains that its rich media full-screen ads generate higher click through rates and are able to generate better revenue to its publishers.

Greystripe has created an automated self service web-based portal for developers to ad enable their Java/Symbian apps. Developers can upload all of their fully developed mobile app ports, while the ad client is automatically merged with their application. Greystripe’s ad network will display pre- and post-roll full-screen ads within the app. Currently, Greystripe supports over 1,400 Java handset models, in addition to iPhone and Android. Greystripe will also migrate 1,200 Java titles on its consumer mobile gaming store GameJump into the Ovi App Store.

Greystripe has continues to make its ad offerings more appealing and attractive to both developers and advertisers by extending support to various devices and even launching a guaranteed CPM program. The company also partnered with Tribal Fusion to enable online ads to fit on iPhones.

It’s unclear how Google’s acquisition of AdMob and Apple’s acquisition of Quattro Wireless will effect the other ad networks in the space. If anything, these networks will now have to compete with two of the largest companies in the world. But Greystripe, which recently received a $2 million infusion from NBC, is wise to continue to innovate and expand its reach and should be able to hold its own.