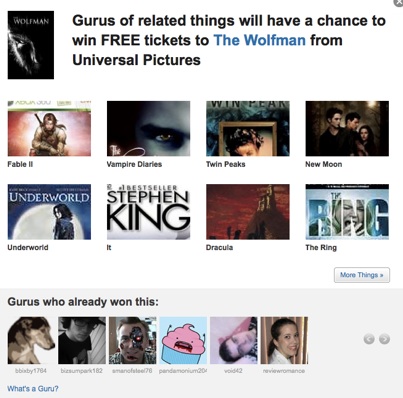 Brand marketers trying to figure out how to tap into social influencers online might want to pay attention to an experiment going on at AdaptiveBlue’s GetGlue. Glue is a social browsing assistant that shows ratings and recommendations of movies, books, restaurants, stocks, and other things as you surf the Web (via a browser plug-in). Members who rate and comment the most in any given category are named Gurus. These are the most active, opinionated people on the service.

Glue is going to be rewarding its Gurus with free giveaways for movies and book from promotional partners including Universal, Random House, Hachette, Harcourt, Farrar, Wiley, and Harper Collins. Some of the initial giveaways include free tickets to the movie The Wolfman or free copies of books such as Jaron Lanier’s You Are Not A Gadget and Gary Vaynerchuk’s Crush It! (as if that needed any more social-media promotion).

The media companies get their movies and books seen by known influencers, who are likely to rate, comment, and talk about the products. And Glue gets a way to reward and encourage active users with free books and movie tickets. Targeting giveaways to online influencers is smart. Typically, these giveaways involve 10 books or tickets. The unanswered question is how many downstream purchases will these gurus influence.

Glue is still a small service with a few hundred thousand active users, but tens of thousands of those are Gurus of one sort or another. Using semantic technology, Glue can show related products and media across categories. So if you are a Guru in Horror, that might be because you rated the movie “The Ring” or the last Stephen King novel. In the same way, Glue can broaden the pool of Gurus eligible for a giveaway by including related categories. This way the brands still get to target people who influence the types of products they are pushing, but can expand that to related areas. For instance, someone who rates a lot of Stephen King novels would be a good person to give a Wolfman ticket, even if that person hasn’t rated any horror movies yet.

Targeting influencers is a well-worn strategy in brand marketing, but with online services like Glue it is becoming easier to figure out who are those influencers. The key, of course, is to make sure the giveaways are desirable enough to act as an incentive, not just the books and movies that need an extra push.