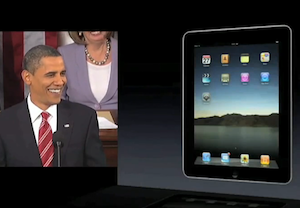 Remember those guys who made those nifty Google Wave movie mash-up videos? You know, the ones with Pulp Fiction and Good Will Hunting? Well, they’re at it again, with the new hot ticket in town: the iPad.

Whirled Creative has made a mash-up of yesterday’s iPad announcement and President Obama’s first State of the Union Address from last night. Those who were concerned that the Apple announcement was getting more buzz than the President’s speech can now have the best of both worlds.

Watch below as Obama talks about Apple’s revenues, compares the Zune to a root canal, talks about the “status quo” netbooks, and unveils the mythical iPad to a thunderous applause by the House and Senate. Obama also highlights TechCrunch as one of the “experts” of the system, which we appreciate.