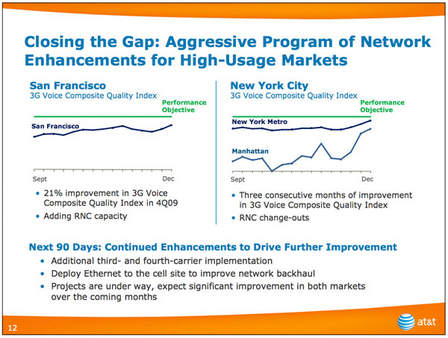 A recent AT&T earnings call consisted of a lot of talk talk talk but one slide stands out: it essentially admits that 3G in San Francisco and New York sucked ween AKA were both far below their official performance objective.

Although I can’t figure out what the actual “Performance Objective” truly is based on this slide, those lines do seem to be going up. While anyone can make up a statistic, for AT&T to come out and say “we suck in those areas” is big news. Good on you, lads.

Now just let me search Google on 34th Street and Broadway without getting a “Cannot connect to server error” with four bars and plenty of bandwidth while not hanging up my calls to my mom and we’re good.

The slide goes on to mention the addition of RNCs (Radio Network Controllers) to those areas as well as a general improvement in calls in Q4 of 2009.