San Francisco hasn’t heard much from ZocDoc since its TechCrunch40 debut in 2007, but that changes next week. The site, which allows people to quickly see local doctors’ availability and make an appointment with just a few clicks, is finally launching in San Francisco on Monday.

So far ZocDoc has been focused on New York and Washington DC, growing users and new doctors by double digits, month-over-month since inception. Last month some 110,000 patients used the site to make appointments. The company decided it was time for a third city, opening it up to an online vote and San Francisco won overwhelmingly.

Votes aside, it’s a natural next step. San Francisco is full of Web savvy early adopters, and new transplants who are always trying to figure out how to find a new doctor. On a less rosy side, San Francisco also has the highest STD rates and some of the longest wait times to see a doctor in the country. For instance, it takes 36 days to see a dermatologist in San Francisco.

The problem is so bad that California has recently enforced legislation that requires doctors to see patients on a timely basis. ZocDoc–which specializes in scheduling same-day appointments– could be a great way to for doctors to outsource some of those requirements immediately. (If I were one of the pun-ier writers on staff, I’d say the launch is  “just what the doctor ordered.”)

ZocDoc’s approach is a familiar one. Just like OpenTable finds a dining time in a certain neighborhood or an online travel company finds a hotel room for a certain price, ZocDoc integrates with doctors offices’ appointment systems, filling open time slots far more efficiently, especially since 35% of ZocDoc users make appointments after hours.

There’s a benefit to the city too. Some 40% of ZocDoc users schedule same-day appointments, which takes the burden off emergency rooms. The company estimates that it has saved New York some $500,000 in emergency room costs. And of course, that saves patients money too: The average emergency room visit is $700, versus $60 for an office visit.

And guess what? The company actually has a business model. Doctors pay an average of $200/$350 a month for the service. It has taken some work to get everything running smoothly, according to ZocDoc spokesperson Karsten Vagner. There are some 1,400 different practice management software systems out there and ZocDoc has had to integrate its site with each of them. But it’s a lean organization nonetheless. After recently doubling its staff ZocDoc still only has 35 employees.

Aside from an undisclosed angel round, ZocDoc has only raised $3 million to date from superstar investors that include Amazon founder Jeff Bezos, Salesforce.com founder Marc Benioff and Khosla Ventures. Vagner said there were no plans to raise more money, but I’d be stunned if another round wasn’t in the works.

As for further expansion, Vagner says to expect at least one or two more cities in the next eight months. New city launches can be uncertain for any local-oriented company, since local network effects matter more than anyone’s experience in New York or DC.  But ZocDoc has additional chicken-and-egg problem: One of the core features is patient reviews, but it only allows patients who’ve booked appointments through ZocDoc to leave a review. That means the site isn’t immediately as helpful as it should be. That said, there is some clear momentum, at least on the doctor side: New York launched with a few hundred appointment slots, DC opened with 21,000 and San Francisco doctors have already posted 100,000 openings.

The question with ZocDoc has never been “Do we need this?” but rather “Can they roll it out fast enough to keep a first mover edge and build a sizable company?” The pace is slower than what we’ve seen from other local-oriented companies like Yelp and OpenTable, but healthcare is important and ZocDoc is smart to focus on getting it right in each place before moving on. 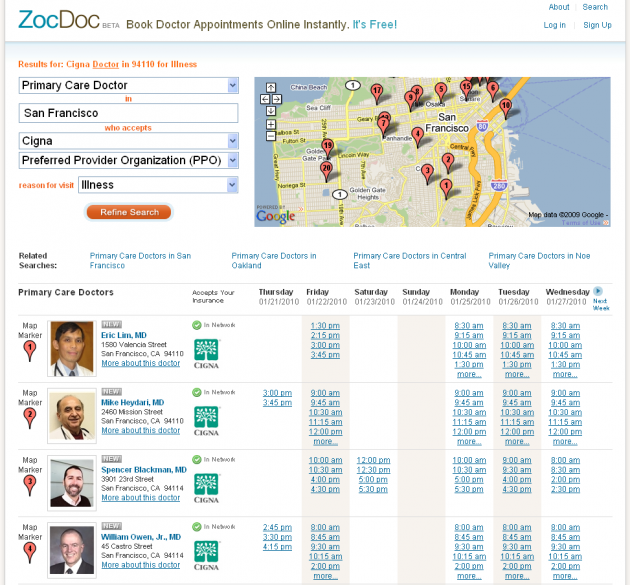