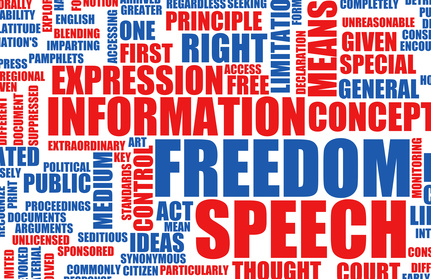 Free speech is a basic human right and is essential to creativity and innovation.  But every society places limits on this, particularly when it transgresses into “hate speech” – which disparages someone or some group on the basis of race, gender, age, ethnicity, nationality, religion, sexual orientation, and so on.  Calls to violence are tolerated even less.  These often lead to jail terms.

The Electronic Frontier Foundation (EFF) has been the tech world’s champion of free speech since its inception in 1990.  I have always admired this group for defending the oppressed.  But when organizations achieve too much success, they often develop a sense of confidence and arrogance that, when unchecked, leads to their downfall.  They begin to believe they can “do no evil”.  A recent statement by the EFF makes me wonder whether it has reached this stage and needs to have its “Google China” moment. Michael Arrington wrote in 2007 that the “EFF may be getting a tad overzealous in its desire to defend our right to violate copyright and other intellectual property laws, and needs to take a step back and consider if the oppressed are now becoming the oppressor”.  I’m beginning to believe that Michael was right.

Let me explain the background of a case which the EFF has just passed judgment on so that you can decide for yourself whether this is indeed the situation.

The anti-immigrant groups and xenophobes I’ve written a lot about see the H-1B visa issue as the beachhead in their battle against skilled immigrants.  Nearly all foreign skilled professionals (such as engineers, scientists, and doctors) need this visa to work in the U.S.  As with the tax system, Medicare, and the big bailout, the H-1B visa program has its flaws and is occasionally abused.  You don’t see much visa fraud in Silicon Valley, because skills and competence are the only things that matter.  But for grunt-type IT work, cost is a bigger factor.  Most large service companies are highly ethical and go by the book. There are, however, a few shoddy body shops that bring in low-skilled workers and pay them below market wages.  These are a small minority.  Nevertheless, they make an easy target.

One of the most vocal members of the anti-immigration alliance is a computer programmer who calls himself “Tunnel Rat” (he doesn’t have the courage to reveal his real name).  He maintains several websites including ITgrunt.com and Endh1b.com, that focus on attacking Indians, Hindus, and H-1B workers, whom he calls “curry-scented slumdogs”.  His websites are laced with racial slurs and profanity in English and Hindi and openly advocate hatred and violence.

Here are some examples from these websites.

Immediately after the massacre at the Fort Hood military base in Texas last November, which left 13 people dead and 29 wounded, Tunnel Rat put up a blog post that tried to link the killings to the H-1B program.  It said:

“American tech professionals have been forced to cower to the Indu-Invaders in I.T. because if they stood up for themselves, they would be labeled racists.  And thus, like the Feds, they said nothing, even as they were training their slumdog replacements and packing their boxes”.

A few days later, a gunman shot six people in Orlando, Florida.  According to CNN, Jason Rodriguez had worked for a year at RS&H, a facilities and infrastructure consulting firm, as an entry-level engineer before he was put on several months of probation and fired for “performance issues”.  Then he worked at Subway for two years before losing his sanity.  Kim Berry, President of a group called the Programmer’s Guild (which claims to represent the technical and professional workers of America, and which, according to Wikipedia, had 400 members at what was presumably its peak in 1999), posted on a blog suggesting that the murders might not have happened if RS&H (which has 800 employees) had not applied for six H-1B visa slots in 2007 and 11 in 2008. 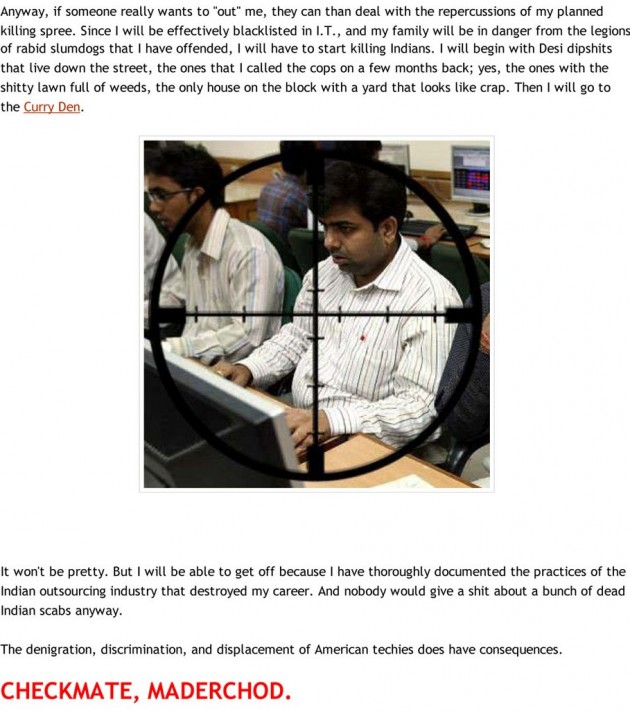 “It is my belief that Rodriquez was pushed aside to make room for an H-1B…  I predict that this is just the beginning of a massive wave of violence as middle-aged American men reach their breaking point and start to settle scores.  … H-1B program is now a national security issue.  We can’t have an invasion of curry-scented pod-people displacing millions of Americans”.

All of this is bizarre, despicable and disgusting, but other than the racial slurs, may not cross any lines. It is still free speech. Here is a posting from Tunnel Rat that does cross the line:

Now that the slumdogs have taken over Google, I can no longer trust them to protect my anonymity…  That is why I am protecting myself and my family by stockpiling weapons and ammo…  My greatest hope is that some techie goes crazy and acts out violently against his slumdog replacement and the collaborators that hired the feral jackal.  That techie in Pittsburgh was way off the mark by going after women at a gym.  If he was going to kill himself anyway, he should of stopped off at the nearby law offices of Cohen & Grigsby.

[Cohen & Grigsby has been in the news for a talk one of its lawyers gave on how to work the H-1B system]. 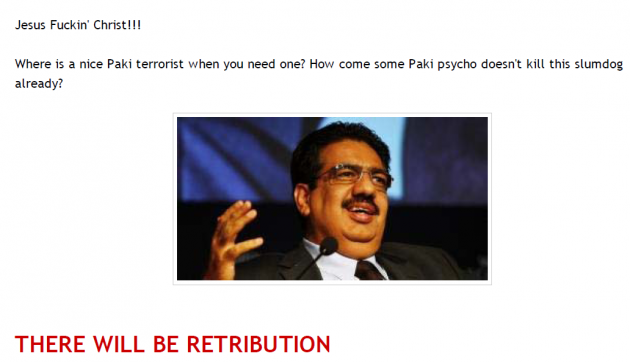 In another post he responds to an Indian concerned about his racist remarks: “You should be concerned about THIS [link to article about violent attacks against Indians in Australia].” Tunnel Rat also gloated about having emailed the person “pictures of dead Indians and other nasty things” and said:

Here’s a deal, SLUMDOGS.  Get rid of Vineet Nayar, “the highly respected CEO of HCL Technologies” and I will stop blogging.  Here’s a picture, so you can identify the FAT FUCK…  Go ahead, eliminate that fucker.  I promise I WILL STOP BLOGGING…  The ball is in your court.

I can cite many more examples of threats of violence and “retribution”, but I am sure you get the idea.

One of the companies maligned, Apex Technology Group, filed suit against these sites.  In late December, a New Jersey court ruled in favor of Apex and ordered the sites to shut down, although allowing them enough time to file an appeal.

After the decision, the EFF put up a blog post criticizing the takedown order and claiming that the “… order dangerously overreaches.  By restricting access to entire websites, it places a prior restraint on all of the speech on the websites, even if that speech is unrelated to Apex”. EFF argued that this would be like “a court shutting Amazon.com or Yelp.com because of a disparaging review of a single product”.  I’m not sure whether this is a good analogy.  In my mind, those sites clearly cross the line from protected speech into terroristic threats or harassment.  A better analogy would be a Jihadi site posting hateful propaganda and calls to violence.  These sites use the same techniques: posting misleading information and hateful rants and suggesting that readers do something to right the alleged wrongs.

So I e-mailed the author of the EFF blog post, Kurt Opsdahl, a senior staff attorney at EFF, to ask him what gives.  I asked what if the site EFF had been defending were attacking African-Americans or Jews: would EFF be taking the same stand?  What if the site had been advocating a holocaust or calling people “niggers” instead of “slumdogs”: would this cross the line?  I also told him that I had received death threats traced back to the domain names in question via email and in the reader feedback section of BusinessWeek in articles I had written about immigration.

Kurt would not respond to the substance of what I asked.  The jist of his response: “A court order should not shut down any website unless the entirety was not protected speech.  While a ‘true threat’ is not protected speech, there are many views which are protected, even if repugnant”.

What shocked me about Kurt’s response was this comment: “I have not read the sites, since they were offline before this matter came to our attention”.  I find this absolutely unbelievable. Doesn’t the EFF know how to search the Google cache?  Doesn’t it have a responsibility to ensure that it is using its power effectively and wisely?

What sort of “power” does the EFF have exactly?  Right after its blog post, ComputerWorld’s Patrick Thibodeau wrote this article condemning the judge’s decision, which, like the EFF statement, didn’t even mention the nature of the speech on the site ordered to be shut down. (Patrick has been a vocal opponent of H-1B visas, something else he does not disclose in his coverage).  Likewise, the San Francisco Chronicle and The Oakland Journal posted articles holding up the EFF blog post as a shining beacon of justice.  The favorable media coverage became a major victory not only for opponents of H-1B visas but also for the general white supremacist, neo-Nazi, “kill all dark foreigners” crowd.  Nice company, EFF.  I’m sure you’ll get invited to the David Duke annual Christmas party soon.

You can debate the merits of the EFF stance from a legal standpoint.  But the EFF cannot function in a contextual vacuum.  I am certain its employees feel overworked and underpaid like those of many other non-profits.  But, by siding unwaveringly with some of the most hateful sites on the Internet and not even mentioning the nature of those sites, the EFF betrayed its charter of upholding justice.  A simple Google cache search would have easily shown Kurt and his colleagues that the sites in question were vitriolic.  By giving Tunnel Rat a free pass, the EFF encouraged several major media outlets to echo its one-sided defense of the ability to talk about killing and hurting Indians and H-1B holders.  If people want to have a debate about whether H-1B visas are good for America, let’s have it.  But if the most spirited response they can muster is to threaten the lives of their opponents, they’ve already lost the debate.

The only silver lining on this dark cloud is that it has brought this sort of xenophobia and racism out in the open. The anti-immigrant groups have claimed to be fighting a righteous battle for American workers.  Now it is clear what lies beneath the surface.  They can only fight with hate because logic escapes them.

Tunnel Rat wrote to say that he did not own a third website which was mentioned in the original post: Guestworkerfraud.com.

Kim Berry wrote to say that his post about RS&H use of H-1B visas was not on the Endh1b.com site. He wrote “Someone else apparently cross-posted it. But it does appear to be an accurate copy of what I had written”. He also asked that it be made clear that he “did not suggest that the murders “might not have happened if RS&H had not filled 17 engineering slots with H-1b.” His quote is: “Perhaps if the job market were not flooded with H-1b (and the dozen related visas) willing to do anything to work in the U.S. the employer would have tried to find a suitable position for this engineer rather than terminating him. But the availably of $50k indentured servant engineers is hard to resist – and hard for American workers – both new graduates and people with 20 years of experience – to compete against.”