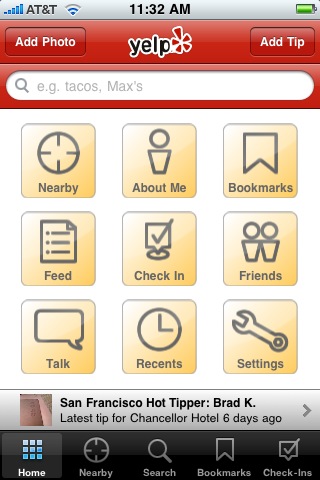 When you think of the idea of “checking-in” at a venue in a mobile app, you likely think of Foursquare or Gowalla right now. The two gained significant momentum, funding, and users in the location space in 2009. But even with the growth, both services are still relatively small, neither much bigger than 200,000 users. That’s why much larger social networks like Facebook are perceived to be a potential risk to them. And one of those bigger networks has just entered the fray: Yelp.

With the latest version of its iPhone app (version 4) which will be released today in the App Store, Yelp is introducing a bunch of new features. But none is bigger than the new ability to check-in to venues. Considering there are some 1.25 million users of the Yelp iPhone app, with this update, Yelp will already become the largest network offering this functionality by far. And it’s not just check-ins. Yelp is also adding rewards for users who frequent certain venues, and a leaderboard. Yes, they’re also getting into the gaming element of location.

So does this spell doom for Foursquare, Gowalla, Loopt, and the others? Maybe, but maybe not. No one is quite sure how well the concept of checking-in will work when tacked on to an existing social network. Yelp is a great one to try it though since it’s already based around venues. But the social connections on Yelp aren’t like more traditional social networks, so it will be interesting to see if with this feature, users start transferring their more traditional social graphs over to Yelp. From Yelp’s perspective, this is just another way to allow people to contribute to the service without having to write reviews or upload pictures, Yelp mobile product manager Eric Singley tells us. It also adds a new layer of credibility to those who do write reviews because other users can now potentially see that these users have been to the place they are reviewing numerous times.

And yes, the idea is to eventually allow Yelp users that check-in places to see certain deals offered up by the venues. Yelp already has this concept in place with their Sales and Special Offers program that’s about a year old. Already there are over 200,000 of these offers that businesses are serving up, I’m told. Yelp could easily turn this on for the new check-in feature as well, which Singley envisions happening. Perhaps most significantly, Singley doesn’t foresee Yelp using such a feature to augment their business model. While he wouldn’t entirely rule it out in the future, he noted that Yelp had no plans to change the idea of letting venues offer deals for free. This could potentially threaten the Foursquare and Gowalla business models. Right now, neither have paid arrangements with venues for the deals they offer, but eventually they were hoping to turn that on. If Yelp offers venues the ability to give customers coupons for free, it could get interesting. 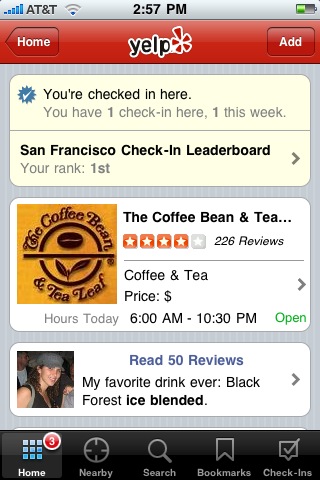 Just as with Foursquare and Gowalla, Yelp users will be able to get Push Notifications when friends check-in somewhere. There will also be a check-in stream to show you where all your friends are. And as I alluded to, users who go to certain venues a lot will be rewarded with badges. At first, this is limited to a “Regular” badge, which you will get if you check-in somewhere twice in a 60 day span (though Singley notes this algorithm could be tweaked as needed). And this badge will appear next to your reviews on Yelp to let others know that you go there a lot. Singley also left open the possibility of other badges eventually. And while this is iPhone-only for now, the check-in data should be coming to the website in a couple of weeks, and then to the other mobile apps as well, I’m told.

But how the check-in battle will play out remains to be seen. First, we’ll have to see if the concept catches on with Yelp users. And that shouldn’t distract current the users from the wide range of other new features in the latest version of the iPhone app. In fact, “this is the biggest iPhone update we’ve ever done,” Singley says. So what else is new besides check-ins?

Yelp has finally added profiles to the app. You can now see and edit your Yelp profile just as you would on the website. This is an extension of the signing-in ability Yelp added in its last update. Also new is the ability to more easily find friends you may know. The Yelp app can use your iPhone’s address book, or your Facebook contacts if you’re hooked up with Facebook Connect.

Speaking of Facebook, you’ll now be able to share things more easily on that network, as well as on Twitter. This includes Quick Tips and the new check-ins. This could potentially help the Yelp app grow even bigger.

Finally, Yelp has updated the Monocle functionality. As you may recall, this is the augmented reality view of Yelp, and now it allows you to lay your phone horizontally to bring up a map overlay that will work with the iPhone’s compass. And with the new check-ins, you’ll also have an option to view where your friends are in this augmented reality view.

Overall, the look of the Yelp app has been updated too. And you can see in the screen shot at the top of this post, the main page now looks more like the Facebook app. It seems that a lot of apps are borrowing this design these days; LinkedIn did recently as well.

Just as it has always done, Yelp plans to test all of these new features on the iPhone first, then roll them out to the other mobile platforms. Of those, not surprisingly, Singley seems most excited about the Android platform.

With Yelp now in the check-in location game, maybe Google will be kicking itself for not scooping them up when they had the chance. After all, I have a feeling we’re going to see a lot of movement in terms of acquisitions in that field this year.

When the new Yelp app goes live (which should be shortly), you can find it here. 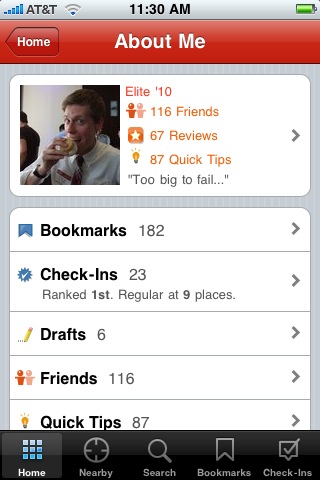 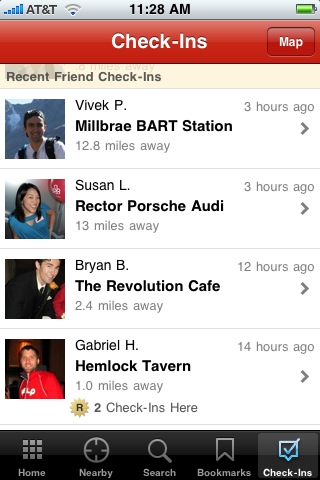 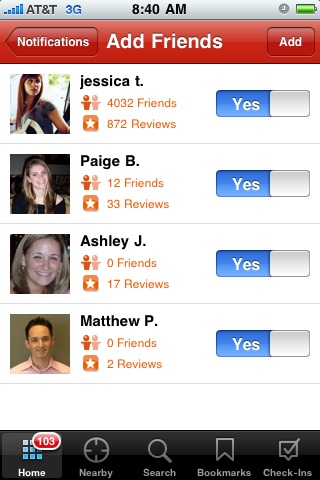 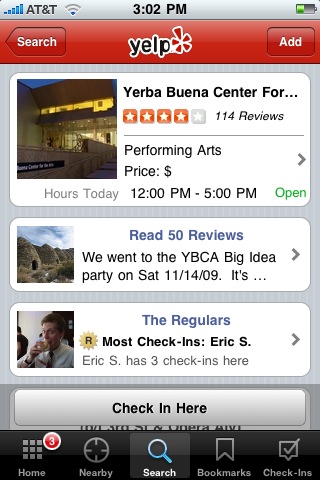 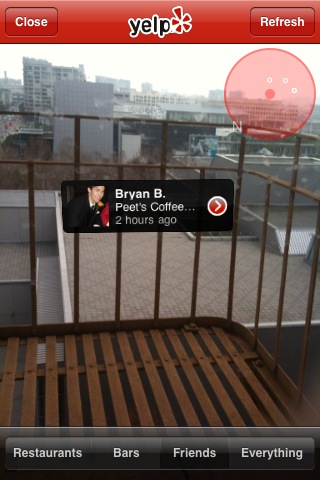 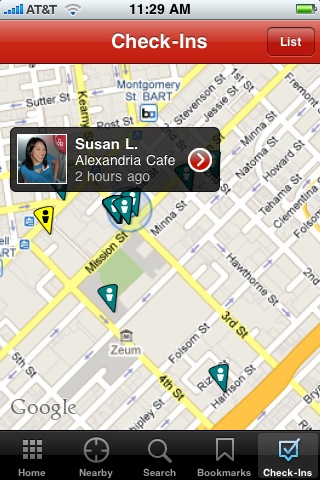