When it comes to mobile advertising, smartphone ads seem to be getting the most attention (see our coverage earlier today for a good example). But there’s also a huge amount of advertising going on through SMS messages. MoVoxx is one company that’s tapping into both channels, and now it’s leveraging its inventory of 700 million monthly impressions to tackle the holy grail of advertising: real-time, location based ads.

To do that, the company recently launched a new pilot with Citysearch, which it’s using in combination with MoVoxx’s directory of phone numbers and associated user details to target their GeoSense ads. MoVoxx CEO Alec Andronikov says that plenty of other companies have tried to perfect location based, real time advertising, but that they’re usually lacking one of three elements he says are required for success: a wide reach, a way to determine where the user is to serve the local ad, and a way to monetize. Andronikov says that MoVoxx has each of these covered.

For the scale side of things, he says that the company has a core SMS network that yields 300 million impressions a month, and another 400 million impressions through in-app advertising on smartphones. He says that the company has also built out tools behind the scenes to optimize which users receive which ads.  It does this by building profiles of user information for each phone number in its system (things like gender and interests), gathering this data from its other products that publishers have implemented.  To determine the user’s location, MoVoxx can use CellID from in-app ads; for SMS messages, it relies on Useful Networks, which works with the carriers to gather location information, even on phones that don’t have a GPS.

Finally, there’s the revenue side of things. One of the problems with making a location based ad platform is getting local merchants on board — you can’t exactly go door to door to sign people up.  That’s where Citysearch comes in. Citysearch has built out a database of 70,000 local merchants who have opted into mobile-based advertising. MoVoxx has access to these companies through a local merchant API, and can automatically build out WAP pages for each using data from Citysearch. Andronikov says that MoVoxx is also working with other local merchant aggregators besides CitySearch, like iPromote and Marchex, to build out its database, and does direct deals with larger brands like McDonalds and Warner Bros.

The flow for the user is straightforward (you can see an example in the image below). First, they receive an location-based ad promoting a local merchant. This could come, for example, at the bottom of an SMS message sent by ChaCha Answers. This text-based SMS ad would then link to a WAP page featuring the company’s address, phone number, and other information.  MoVoxx makes money both from the initial ad unit (on a CPC basis) and from secondary actions on the WAP site.  Users can also opt-in to receive proximity alerts, which allows users to specify if they’d like to receive SMS-based offers from nearby merchants (you can specify certain categories you’re interested and how often you’d like to receive alerts). The ads come alongside SMS content the user has already elected to receive, like ChaCha Answers or Reuters Business News. 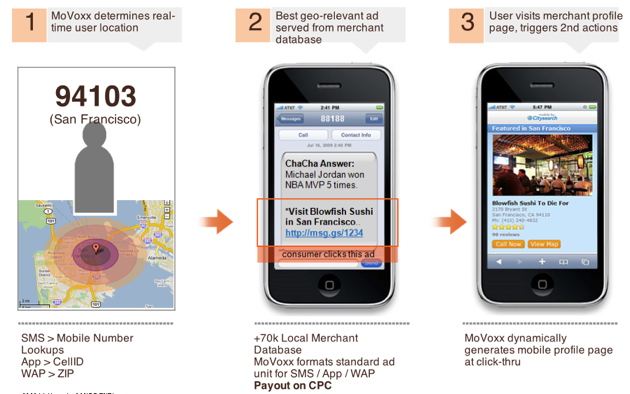