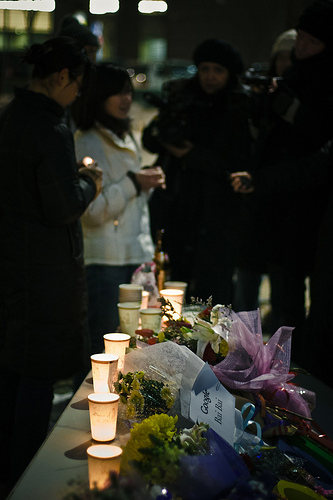 Most publications, including us, noted yesterday that if Google has to lose its $600 million in revenues from China by pulling out of the country, then at the very least it’s won a lot in brand and integrity points by the public, English-language and scorched-earth way they did it. Google’s halo is so bright that even now Valley thought leaders are aghast at the idea that a publicly-traded, for-profit company could have had more than just an ethical motive at play.

Today, as the story has unfolded, Chinese residents have openly “mourned” the loss of Google by putting flowers and candles out at the company’s Beijing headquarters. (Picture above was taken by Junyu Wang.) That’s striking for two reasons. First, it shows the Chinese government’s grasp on censorship has already measurably slipped. And second, it shows that Google’s moral-high ground stance was even effective within some parts of China.

But there’s a third—and potentially more impactful—way this move could play into Google’s market position long term. Take a look at this December 14 eMarketer release on worldwide search numbers. It not only shows Baidu walloping Google in China with double the market share, but it shows that this battle is quickly becoming more a global one. Forget China, Baidu is now the third largest search site in the world and it’s nipping at Yahoo’s heels to become number two. Yahoo had 8.9 billion searches in July of 2009; Baidu had 8 billion. That’s more than double the number four player, Microsoft, which had just 3.3 billion searches worldwide. For the record, Google is still light-years ahead of everyone with 76.7 billion searches. But that doesn’t mean it doesn’t view Baidu as a global threat.

We tend to have the view that China is some copycat Internet backwater, and that’s just not true. China has formidable engineering talent, plenty of venture capital, the world’s largest Internet audience, and in many cases better methods of monetization, especially when it comes to games and social media.

Several people argued today that Google’s pull out would damage the Chinese Internet by leaving only one search player, or suggested it could be opportunity for one of Google’s US rivals. Such pundits don’t get how scrappy and fast-moving China’s own entrepreneur scene is. If there’s a void, it’ll be filled locally. I have no doubt VCs in China are already in talks with savvy entrepreneurs.

But as growth in search and the Internet-at-large goes global, Google’s biggest competitors will increasingly come from China. With it’s announcement this week, it just communicated a powerful message to the world’s democracies or other anti-Chinese factions: Baidu is in the Chinese Government’s pocket; we’re not.

As I pointed out yesterday, this could loom large when it comes to future acquisitions. A number of Chinese Internet companies are building hoards of cash and valuable stock currencies. It’s possible those companies will start competing with Google for acquisitions both in the Valley and the rest of the world. Google, after all, has announced that its shopping spree is heating up, and given the woeful state of its competitors in the US (Yahoo and AOL are too damaged to out-bid Google; Facebook doesn’t yet have a stock currency) Chinese Internet companies could emerge as its chief competitors for hot properties and talented staffs of engineers.

I’m not suggesting that this is why Google made the move, nor do I know if the senior executives even view this as a potential threat. But should a Chinese Internet company make a bid for a US Internet gem, this week’s events will no doubt be brought up as a reason the US government should block it—something we’ve already seen when Arab companies have bid for ownership of US port controllers and financial institutions. That could prove a pretty savvy side-benefit for the search giant as the Internet battles of the next decade start to heat up.