What do you want in a TV? Good picture? Low price? Or… video chat? Well, LG thinks you want video chat, though to be fair their new TVs are also quite delicious-looking. The real star of the show was the “LEF,” however, a 1/4-inch thick display that out-thins Panasonic’s surprise from last year.

Unfortunately, nobody knew a thing about it. “Straight out of Korea,” said one LG rep. “I’ve never even heard of this thing,” said another. So basically, it’s a prototype and not for sale, which isn’t that much of a surprise. It also had a huge brick for a base, which I assume held the guts. By the way, in the video above, I say that the LEF is an OLED display, but I really have no basis for that. Just completely making it up. And the little ones aren’t OLED either. Just small household LCDs. 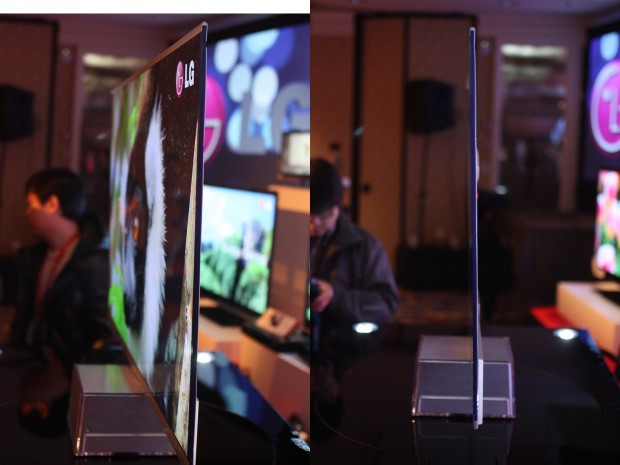 The new LE line of LED-backlit TVs, however, is well-documented. They’re quite large and fairly expensive, but that is the way of the HDTV world. If you think back to last CES, we saw the beginnings of the “connected TV” movement, and this is LG catching up. The TVs offer Skype, Netflix, Napster (!), Vudu, YouTube, and those Yahoo Widgets we saw debut with… was it Samsung, last CES? I think so. They look like regular TVs, so no pictures of them necessary! Besides, LG’s press kit site is being unreliable.

The Infinia series, basically the top end of the LED line, is led by the LE9500, which goes at a ridiculous 480Hz and is, of course, 1080p. The other two (8500 and 7500) have a piddling 240Hz, and the non-Infinia TVs are a totally unacceptable 120Hz. No matter that a ton of content looks like garbage at those refresh rates, it’s all about the numbers!

I’m not going to go over every model; they’ve updated the whole line of TVs from 15-inch little guys to 55-inch ultra-lux models. The details are all here. Dive in.