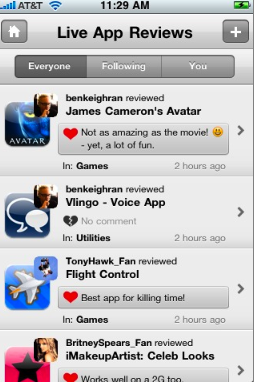 With more than 100,000 apps available for the iPhone and iPod Touch and more than 3 billion downloaded, figuring out which apps to try out is a real challenge. Those top 100 lists in iTunes just don’t cut it. Ben Keighran thinks that what we need to solve this problem is another app. And he built one called Chomp, which should be available in the App Store sometime in the next few weeks. Here’s my sneak peek.

Chomp is a Yelp for iPhone apps. It shows you a live stream of app reviews from other Chomp users, which you can filter by everyone or just your friends. The app uses Facebook Connect to get you started with friends, or you can just follow people as you read their reviews. You can also sort by top reviewers of the week or expert “app celebrities.”

When you click through from the realtime stream of reviews to an individual app, you can review the app yourself, bookmark it or get it. Chomp gets an affiliate fee for each paid app downloaded through its recommendations. Reviews can also go viral by being shared on Facebook or via email.

As you review more apps, Chomp starts to recommend apps to you Netflix-style. It’s built up its own recommendation algorithm probably based on what other people who agree with your ratings also like. The up-till-now stealthy startup is backed by Ron Conway and other angels. Here are more screenshots: 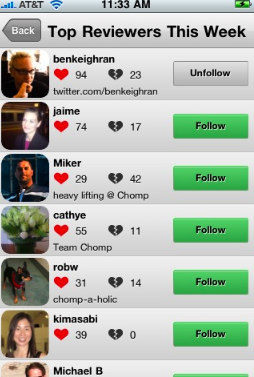