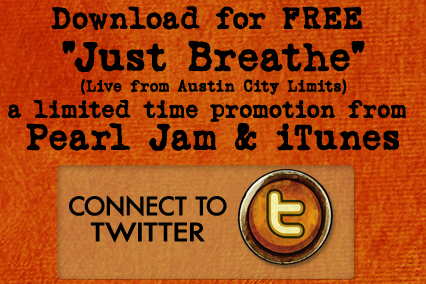 Regular readers may know my affinity for Pearl Jam. The band, which released a new album, Backspacer, last year had a series of promotions with MySpace to promote the album. Now they’re turning to Twitter for some more.

The band has teamed up with the digital media house Culture Jam to launch a new site that easily allows you to tweet about about the Pearl Jam song “Just Breathe.” This site is actually a simple application that gets your Twitter credentials via OAuth. In exchange for the tweet, you’ll receive a code that will allow you to download the song on iTunes for free. Specifically, it’s a live version of the song that was recorded at Austin City Limits this year.

This free song isn’t without a slight catch. Not only will you obviously have to send the tweet, but in small print on the site, you’ll see that by tweeting the message you will also automatically follow the @pearljam account on Twitter. Of course, if you’re tweeting this, you’re probably into Pearl Jam, and won’t mind following the account.

On the site, there is also a way to buy a digital copy of the single and you can enter to win a limited run copy of the new album on White Vinyl LP (there are 15 of them available).

Culture Jam does these types of promotions for a number of musical acts. The use of Twitter in this regard is smart because there is a very low barrier to entry. As we discussed yesterday, a growing number of brands and venues are using Twitter to trade free goods and deals for promotion on the service. 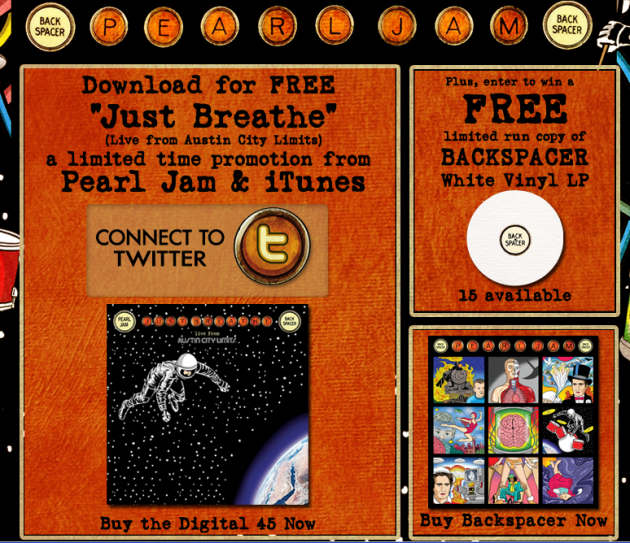