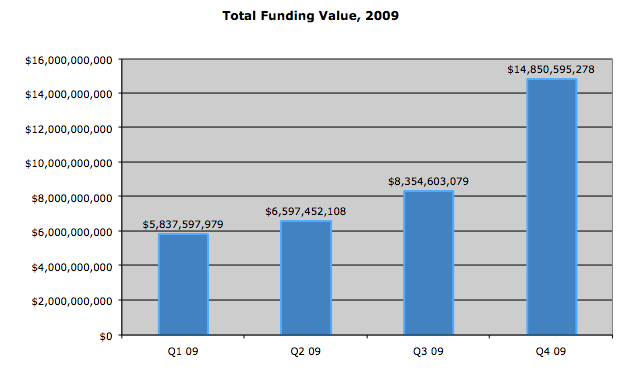 After a year when venture funding was in the doldrums, it roared back in the fourth quarter of 2009 to nearly $15 billion, according to a tally of the venture rounds in CrunchBase. The total value of disclosed fundings for the quarter was $14.85 billion, up 113 percent from a year ago (when the total was $6.96 billion), and up 78 percent from the third quarter of 2009 ($8.35 billion).

Some of the big funding rounds of the quarter included Zynga’s $180 million, Playdom’s $43 million, and RockYou’s $50 million. But clean tech cleaned up even more, with Horizon Wind Energy bringing in $318 million in financing, Silver Spring Networks adding $105 million to its coffers, and Sun Run Generation raising $90 million.

While the quarter saw a robust return to higher levels of investing, it was not enough to counterbalance the previous three quarters of tepid investing. The total amount of capital deployed over the full year of 2009 was $32.6 billion, which was lower than the $38 billion total for 2008. The first two quarters of 2008 were relatively healthy, with $11.5 billion and $11.8 billion raised in venture rounds, respectively. It wasn’t until third quarter of 2008 that the bottom really fell out. Venture capitalists kept their purse strings tight until the third quarter of 2009, when they started to ease them open

The total number of funding rounds increased 51 percent sequentially between the third and fourth quarters to 1,078.  The number of fundings in the third quarter of 2009 was 715, and the year before it was only 618.  So venture activity definitely picked up in both dollars and deals.  Will these new levels set the tone for 2010? 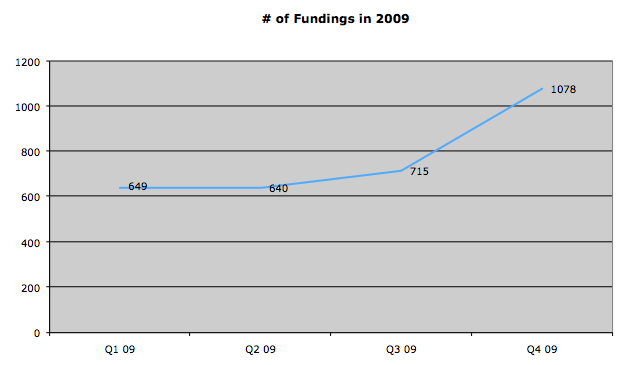