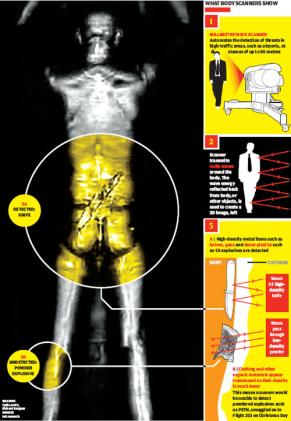 Not to alarm y’all, but those millimeter wave body scanners that have been paraded around as the solution to would-be airplane terrorist attacks? Turns out they’re sorta useless in that, while they’re able to detect dense material (C4, metal, traditional bombs, etc.), they’re completely ineffective against less dense material. And wouldn’t you know it, the powdered explosive that was to have been used in the Christmas plot would not have been detected by the scanners. As Jay-Z would say, on to the next one.

Right, so the millimeter wave scanners—the ones that create a crude image of a nude human being (gasp!)—would not have prevented that Christmas bomb plot because the materials involved (some sort of powdered explosive) aren’t dense enough to be picked up by the scanners. Meaning that if you see any politician (or pundit or whomever) trying to say, “We need these new scanners ASAP; we may not be so lucky next time,” well, kindly point them in the direction of Ben Wallace, who was involved in the development of said scanners before he became an MP in the UK.

The bottom line is, the millimeter wave scanners simply wouldn’t have detected the powered explosive. Now, had the guy tried to smuggle C4 in his underpants that would have been a different story, but that didn’t happen.

And you’ve got to think that for every device that’s developed to help detect illicit materials, the bad guys, however you want to define that, are just as hard at work trying to circumvent said device. It’s not ideal, no.

So now privacy advocates, people who feel the millimeter wave scanners amount to an invasion of privacy have another talking point: they patently would not have foiled the attempt.

(When you think about it, the entire response to the botched attack has been a bit of a joke. Look at the new TSA regulations: people can’t move about a flight in the last hour. What, an attack can’t happen in the time preceding the final hour? You can’t have personal items on your person during the last hour, including blankets and pillows because you could be hiding something underneath… as if a woman’s dress isn’t just as effective at concealment.)

In short, the scanners aren’t going to make you or I any safer than what’s already in place.

And now we wait for the manufacturer of said scanners, or the politician in the manufacturer’s home state, to claim that they’re perfectly effective and that every airport all over the world needs several of them installed now.