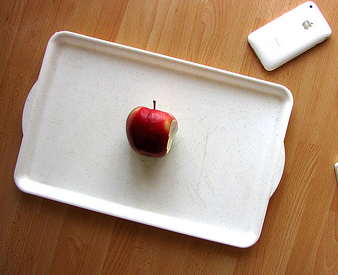 Wilcox has a lengthy post today on BetaNews saying that the world doesn’t need an Apple tablet. And while Wilcox does have some decent general points mixed in with some bad ones, this is hardly a new thought. In fact, it’s little more than an extension of a concept that has been around for a while, but has been reinvigorated recently as the hype around Apple swirls: That tablet computers are a niche product. Of course, it’s easy to argue that when you have history on your side up until this point. But Wilcox’s post completely overlooks what is likely to be the larger point, and in general is a dangerous way of thinking.

Now, let me just state right off the bat, that Wilcox’s conclusion could absolutely be right: That Apple’s tablet device may well turn out to be a bust. While Apple has a great recent track record, a new product is still always going to be somewhat of a crapshoot, even for them. That said, Wilcox seems awfully close-minded about the product’s potential, and frames his argument around that. He argues, for example, that an Apple tablet will be little more than a less-compelling version of the iPhone because it is less portable. Meanwhile, users who want more computing power will continue to use laptops. Again, that’s the basic premise behind the most of the recent arguments against Apple’s tablet. But Wilcox doesn’t even for a second imagine something that is very obvious to most people who follow Apple closely: The likelihood that they’re going to release a product exactly as we’re currently thinking about it, is very small.

There is a reason that no less than Steve Jobs is said to be running point on this project, and has been for the several years that it has been in existence. The thought that Apple is simply going to settle, and release a product that is largely the same as all the other tablet computers that have come before it, is laughable. Jobs himself has supposedly shot down the product a few times because it wasn’t up to snuff. Don’t think that he won’t do it again, if he has to. But the indications now suggest that this product may finally be up to what he considers to be Apple’s standards. And if that’s the case, we can all expect something that’s at least somewhat unexpected.

And it’s potentially even bigger than that. Last week, I argued that the reason everyone is so excited about this tablet is because there is the very real possibility that it will alter the role of computing in our lives just as the iPhone has. Daring Fireball’s John Gruber took that concept further: “I think The Tablet is nothing short of Apple’s reconception of personal computing,” he wrote. While both of those concepts may sound a bit extreme, stop to think what is more likely: That Apple is happy to create a standard offering in a niche category, or that they’re trying to redefine the category and possibly the entire market?

It’s Apple, they’re trying to hit a homerun. That doesn’t mean they won’t strike out, but make no mistake that they are swinging for the fences. To create a bland tablet in the image of those that existed before it would be the equivalent of a bunt with no one on and two outs.

Something else to consider: There is the very real possibility that this could be Jobs’ last major new product launch. Health issues aside, Jobs will sooner or later retire from Apple. As we all know, products take a long time to come into existence from beginning to end — especially at Apple. And while I’m sure they have other new projects in the pipeline, it certainly seems possible that this tablet could be the last major one for a least a few years. Does anyone really think Jobs is going to go out betting on a niche product? No.

Wilcox argues that Apple’s recent hits like the iPod and iPhone were both just extensions of markets that already existed and were proven: Portable music players and mobile phones. That’s true, and Wilcox does acknowledge that Apple did make both of those markets better with their offerings. But he says that the tablet market won’t be the same because it’s “niche,” and Apple won’t be able to jump start it. Of course, this completely overlooks perhaps the best example: That Apple did jump start the personal computing revolution in the 1970s and 1980s. Before that, the best way to describe the PC was “niche.”

The most peculiar aspects of Wilcox’s post: His constant asking for readers to argue with him in the comments (we call this “baiting”), and his thought that if the tablet flops, it will demolish Apple’s stock price (I mean, it’s not like they’re making billions in profit each quarter off of all their other businesses and have more than enough leverage for even large risks now), simply distract from the rest of his post. Wilcox often likes to take the contrarian approach with regard to Apple, and that’s fine, it stirs interesting thoughts and discussions. But he’s often wrong, simply because it seems like he’s wants to reach a certain conclusion.

But all of this goes deeper still. The main problem I have with Wilcox’s post is the implication is that no company should step outside of its comfort zone. The arguments that Apple shouldn’t build a tablet simply because other companies have tried and failed in the past, or that they shouldn’t make a tablet because they failed with the Cube, are both troubling. Apple clearly believes that the future of computing is touch-based, and the tablet is a step in that direction. Maybe they’re wrong, but it would be a disservice to everyone to suggest they not even bother to try and find out. The potential upside is far too high. It’s the kind of stuff that keeps technology exciting and advancing.