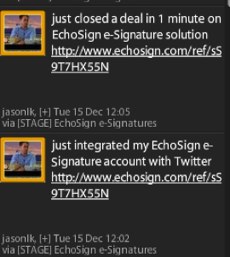 The startup is also launching a contest to incentivize the use of Twitter when signing deals via EchoSign and will reward the top closer and quickest closer each month with gift cards and prizes. Echosign is used for a variety of transactions, including those in real estate deals, sales contracts and in human resources activities. Of course, its important to note that users may not want to Tweet out their deals to the public for privacy reasons.

EchoSign’s electronic signature service lets you append digital signatures to contracts and other business documents, store them in digital form, and manage those documents without printing them out and faxing them. The startup has a freemium model, where the you can use a basic service for free but pay anywhere from $14.95 to $300 per month for a subscription service that includes extra features such as PDF encryption and password protections. EchoSign has gained traction as more businesses adopted SaaS and cloud computing applications. For example, EchoSign has gained significant popularity on Salesforce’s App Exchange. EchoSign is also integrated with web-based productivity suite Zoho.

To date, EchoSign has raised $8.5 million in funding. The startup faces competition from DocuSign and VeriSign.