Bambuser, a mobile streaming startup in the same space as Qik and Ustream, has announced that their live streaming iPhone application has been approved by Apple. The news comes only a few days after Ustream’s live video streaming app was approved, ending a 18 month long drought of broadcasting apps on the App Store. The Bambuser application lets anyone use their iPhone to broadcast live video directly to the web. You can get it on the App Store here. [iTunes link]

The release of these apps is a big deal — for a year and a half since the App Store’s launch, Apple consistently rejected any application that allowed users to broadcast video from their iPhones. The exact reason for this ban is uncertain, but has been attributed to (very valid) concerns over AT&T’s ability to handle their heavy bandwidth consumption.

Bambuser is directly competitive with Qik and Ustream (through Ustream also offers more robust streaming for events, too). We last covered Bambuser last December, when the site got a major overhaul. The service now supports live broadcasting from the iPhone, Symbian, Android, and Windows Mobile, spanning 200 devices. It also offers support for video streaming through desktop web browsers.

Now that Bambuser and Ustream have their live streaming apps available, it’s strange that Qik is still MIA. Qik was really the pioneer in mobile broadcasting, and they’ve definitely got a functional iPhone app (I’ve been using it on my iPhone for well over a year using an ad-hoc build). Presumably they’ve hit a snag in the Apple approval process. 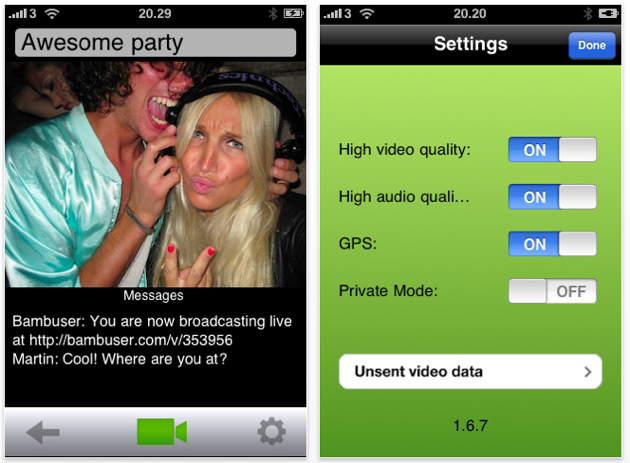