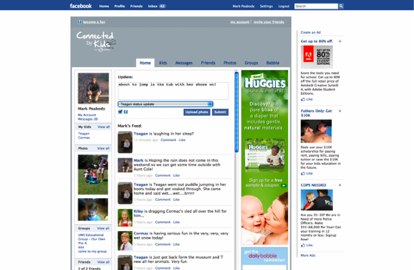 We recently wrote about Babble, a magazine and parenting community site aimed at urban hipsters, after the startup raised $1 million in funding from Greycroft Partners (the site previously raised $2 million in an earlier round) Spun off from sex and dating community Nerve Media, Babble takes a more modern view on parenting, aimed at a younger generation of parents who live in cities, equally share parenting duties (or at least make an effort) and use the internet to access information.

Babble’s new Facebook app, called “Connected by Kids,” allows parents to create Facebook profiles for their children, as well as groups for schools, softball teams, and friends. The virtue of the app is that it allows users to share photos and updates with family friends without sharing them publicly.

Babble’s CEO Rufus Griscom told me that many parents don;t care to share intimate pictures of their children with their entire friend base on Facebook. Babble’s app lets users create a mini-social network within Facebook. The site has steadily been growing in traffic, and now is seeing around 3.5 million unique users per month. The Facebook app should only help contribute more traffic to the site.