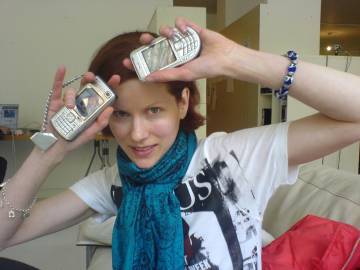 Day two of Le Web and I’m hard at work: perched on the edge of a gigantic bed in the speakers’ lounge, having an important meeting with my friend Andy. Our agenda: trying to come up with amusing ways to fuck with Daniel Ek of Spotify.

Ek (pronounced “Eek” – he’s Swedish) recently became our favourite comedy target after we heard a Spotify employee telling a girl that he sometimes acts as Ek’s (“Eek’s”) bodyguard at important gatherings.  Just think about that for a moment, and reflect on the peculiar kind of ego you’d need to possess to fear kidnap when you’re hemorrhaging money at the rate Spotify is. What on earth does Ek (“Eek”) think they’re going to demand as a ransom? Equity? Unmarked hype?

And so, like all right thinking Brits, the moment Andy and I heard that story, we knew it was our duty to mess with him. Our brilliantly simple plan? We’d spread the rumour that Daniel Ek’s name is actually pronounced Daniel Eek. (“He’s Swedish”)

We were just starting to figure out how we’d actually kick off the rumour when we were interrupted by Arrington, who had been sitting on an adjacent bed, engaged in an important meeting of his own. “Hey, come and see this,” he shouted to me, in the way people who think you work for them do.

“This”, it turned out, was a strikingly pretty red-headed girl, clutching some kind of European smartphone, and flanked by an arguably even prettier blonde PR girl. The redhead appeared to be dressed as some kind of couture clown, while the PR girl was dangerously close to wearing a skirt. A good rule of thumb for PR people: try not to upstage the talent, especially when the talent in this case is Anina – a Paris-based American model who, with her cartoonish dress and love of all things tech, is apparently building a huge following in China.

Anina was in the middle of pitching Arrington on her new mobile app. It’s called Anina Dress-Up and, as the name hints, it allows teenage girls to dress up Anina in various outfits, and pervy men to do the exact reverse. Fun for all the family. The app is available as a free download, but each item of clothing – right down to the underwear – is a replica of a real garment that can be purchased through a mobile store.

As Arrington filmed on his Flip cam (video below), Anina and I talked for a while about just how disturbing it must be to know that people are dressing and undressing you on their phones. Anina explained – with an entirely straight face – how surprised she was how many people requested more underwear options in the app. The requests worried her, not for the reasons you’d think but rather because she feared that showing too much skin might get her blocked from Apple’s app store. I told her to focus on Android where that kind of thing is positively encouraged.

What struck me about Anina’s demo of her app – apart from the mind-blowing weirdness of watching a hot real-life cartoon undressing a virtual cartoon version of herself – is how neatly it illustrated the latest fad for wired celebrities: the ego-app.

It used to be that the must-have accessory for the tech-savvy celeb was a fan-page. Then came a blog, and a MySpace profile and Twitter. Now, at the end of 2009, you’re no-one if you don’t have your own app. Soulja Boy has an app. The Pussycat Dolls have an app. Lady Gaga has an app. And of course T-Pain has an app. Companies like Moderati do the heavy-lifting for the high-end famous like Soulja Boy, while Mobile Roadie offers a $500 out-of-the-box app for impoverished bands, athletes, authors and – of course – web celebrities.

Two weeks ago, I sat in a bar in San Francisco while a friend scrolled through her iPhone to show me her latest download: the Brian Solis app. Yes, Brian Solis – Valley PR, always-on web 2.0 schmoozer and occasional TechCrunch contributor – has his own app, available through Apple’s app store. Thanks to the app, Solis fans can view photos of their hero, read his latest tweets, track his speaking appearances and even see when he’s visiting a town near you. That last feature also generates the most sinister alert box I’ve ever seen on a hand-held device” “Brian Solis would like to access your location. Allow?”

It’s easy to dismiss the the Solis app as an ego trip of Ekian (Eek-ian) proportions, but really there’s a strange logic to the Twitterati wanting to secure themselves a place on your iPhone’s home screen.

The fact that the web allows anyone to become famous prevents an ironic problem for the succesful micro celebrity: egalitarianism is all well and good while you’re on the way up and using Twitter and MySpace to make a name for yourself. But once you hit a certain level of pseudo-fame, you suddenly find yourself needing to distinguish yourself from all of the other plebs who have dragged themselves to the top of the cyber-heap. After all, if everyone is equally famous, then really nobody is famous at all.

A place on Twitter’s suggested follower list used to be the mark of truly having made it – but they’re letting any old schmuck on there now. Having a popular blog or online TV show won’t cut it either – anyone can do that with WordPress and iMovie. But an app! An app takes real money and development time – and so having one immediately sets you aside from the herd. Whether your app actually does anything useful is irrelevant, as long as it features your name and face – and reflects your “personal brand”. Giving it a clever name isn’t that important either – Brian has shunned clever titles like “Quantum of Solis” in favour of simply naming his app “Brian Solis”.  The important thing is that having your own app means you’ve truly made it as a micro celeb.

This week the new paperback edition of my WWII-winning book is published in the UK and I’m seriously considering creating a Paul Carr app to promote it. Rather than having any features of its own, the app would simply – and awkwardly – wedge mentions of my book into everybody else’s apps. Superimposing tiny photos of the cover into Brian’s photos, or using T-Pain’s auto-tuning technology to make it sound like everyone is singing about me. That kind of thing.

And of course once my app hits the app store, it will surely be only a matter of time before my tech-journo colleagues follow suit. TechCrunch fans can look forward to the Michael Arrington App, which will be available on iPhone at first, before deleting itself in a fit of pique and moving to the Droid. (It will also be simultaneously the most and least popular app in the app store  – a contradiction that no-one will be quite able to account for.) Or perhaps the MG Siegler App – the only app that reviews itself on TechCrunch four hundred times a day.

Away from TC, there’ll be the Om Malik App, offering up-to-the-minute technology news, read in the voice of Milton from Office Space – and, somewhat less charitably, I’m looking forward to the Kara Swisher App which does exactly the same as the Arrington app, only a couple of days later. (Or the Pete Cashmore App, which is basically the Kara Swisher app in a smarter suit and with more typos.)

One person who won’t have to worry about developing his own ego-app, though, is Daniel Ek. Given how busy Ek is with Spotify, Andy and I have generously decided to build an appropriate app for him. Titled “The Daniel Ek Rumour App”, it’ll be your number one source for amusing lies about Daniel Ek. We really hope he likes it – after all, we’d hate to get a visit from his security detail.