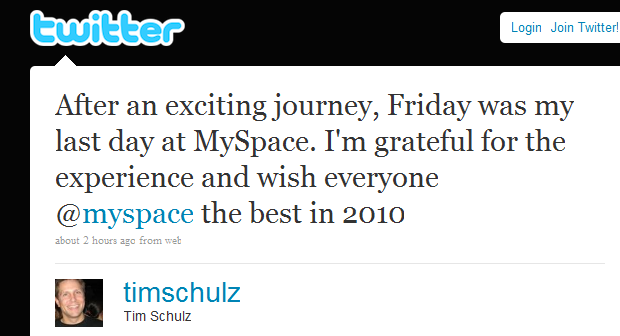 Tim Schulz has resigned from his role as Senior Product Manager at MySpace, he confirmed a couple of hours ago on Twitter. Schulz let the MySpace executive team know that he was leaving the social networking company on Friday, and he informed us that starting January 2010, he’ll be running products as part of the general management team at e-commerce startup Magento.

Schulz was hired in the Fall of 2008 to work for MySpace International, and later moved to a senior role in the Product Strategy team together with Todd Leeloy (former VP of International Product and now VP, Strategy under Jason Hirschhorn). Schulz focused a lot on the realtime web.

He said he had a terrific time working at MySpace but decided that the Magento gig was a better fit considering his background as consultant at Sapient, and was excited to join a fledgling but fast-growing company that operates on the intersection of B2B and B2C.

His tenure at MySpace was surprisingly short though, so I suspect there were other things at play too, but we’ll give Schulz the benefit of the doubt because he sings nothing but praise for the company and its executive team.

Schulz also recently launched a tech blog dubbed TrendSlate, which he hopes will compete with TechCrunch some day.

What can we say, Tim? We hope Magento keeps you super busy.