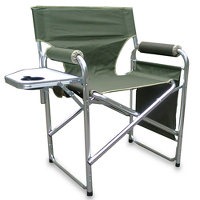 If you’ve ever spent an extended period of time outside during the late fall or winter watching some sort of parade, sporting event, or interpretive dance, you’ll have no doubt A) had plenty of time to re-examine your life and B) wished you’d brought a chair. Now add C) to that list: wished the chair you didn’t bring was heated.

According to Hammacher Schlemmer, “This is the only portable folding chair with a heated seat.” It costs $120 and “undetectable carbon fiber heating elements woven into the chair heat from 120º F to 140º F to warm your legs and posterior.” Now we’re talking.

The built-in battery is good for four hours on the lowest setting and two and a half hours on the highest setting. Recharge time takes about two hours and can be done via standard AC or using the included automobile adapter.

Last but not least, the chair supports up to 275 pounds, there’s a fold-out cup holder, and three pockets for stashing some snacks, magazines, and anything else that’ll make the time spent watching 22 six-year-olds chasing a soccer ball in the wrong direction go faster.